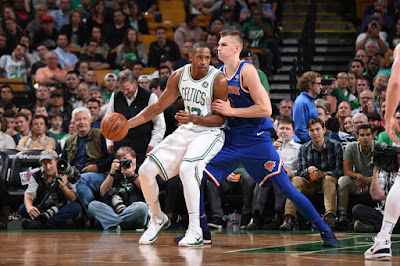 While the play of Jaylen Brown and Jayson Tatum headlined the Celtics' lopsided 110-89 victory over the Knicks Tuesday night, Brad Stevens reminded everyone just how great his team can be when it puts forth the kind of effort we saw on the defensive end.

It's still too early to determine what this team's identity is -- the jury is still out -- but if the Celtics are going to be successful this season, defense will be the foundation of that success and according to coach Stevens, Al Horford is the defensive anchor of his team. The Celtics head coach praised his veteran big man after Tuesday's win, saying Horford doesn't get enough credit for being among one of the league's toughest defenders.


"A lot of names get thrown around, rightfully so, in defensive talk around the league. I mean, there's a lot of really good defenders but Al's up there, and doesn't always get mentioned, and that's okay with Al," Stevens explained. "I think that he's kind of proven that he's okay with just contributing to winning whether he gets talked about or not."

The Celtics not only put the defensive clamps on New York's cornerstone star Kristaps Porzingis, who went 3-of-14 from the floor, they also finished with 11 steals and 7 blocks. For Boston, it was certainly a group effort, Stevens mentioned, while also singling out Horford for his gritty one-on-one matchup against one of the league's rising stars.


"He was great on [Ben] Simmons [last] Friday, he was unbelievable tonight on Porzingis," Stevens said. "And it's not just that; the way that we were guarding Porzingis -- we had a lot of guards switching onto him and doing different things, and I thought that both Al and then for a few minutes, that Semi [Ojeleye] was in the game on him, both provided a good lift in that regard."

In the past, Al Horford finished the 2015-16 season with the 19th best defensive player rating (113.0), according to Fox Sports Advanced Stats. Last year, he dipped down to 57th (107.4) but has an opportunity to return to his old form.

Although numbers don't always tell the whole story, especially in a four-game sample size, he's certainly won the eye test and has already improved his defensive rating to 96.3.

Horford reached his first double-double of the season (13 points, 13 rebounds) against the Knicks, turning in yet another productive night.  He's averaging 13 points, 8.8 rebounds and 4.3 assists this year and will look to keep it up when the Celtics head to Milwaukee to take on Giannis Antetokounmpo and the Bucks Thursday night.