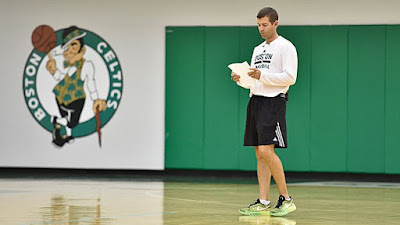 After undergoing surgery for the fractured tibia/dislocation of his left ankle, Gordon Hayward is in great spirits and can't wait to get started on his rehab, according to head coach Brad Stevens.

Hayward, who is in the post-surgery phase of his recovery, spent time with his head coach on Thursday and discussed ideas on the best ways for him to stay engaged with the team throughout his rehabilitation.


"I was over there yesterday for a while [visiting Hayward], I try to maintain consistent contact," Stevens said. "It's obviously post-surgery, he's having some of the post-surgery challenges of pain and everything else. Surgery went great, his spirits were pretty positive yesterday. We talked a little bit about how to approach the next five months with maintaining that positivity with different ways to stay engaged, different ways to approach this, attack this and he's ready to get started on his rehab the minute he got out of surgery."

Although Hayward can't physically stand on a basketball court, Stevens believes it's important for Hayward to stay active when he's around his teammates and reached out Magic head coach Frank Vogel.

Vogel coached the Pacers back in 2014 when Paul George suffered a gruesome injury -- a right tibia and fibula compound fracture. Hayward's fractured tibia almost instantly drew comparisons to George's injury. Not only because of the horrific and cringe-worthy nature of the respective fractures but also because of how soon George returned to the floor.

He rejoined his teammates the following season with little to no lag and his successful recovery was proof that the same could be said about Hayward. The former Pacers head coach gave Stevens a few ideas on how to not only keep Hayward active but to also keep his spirit afloat throughout his long road to recovery.


"It's not just basketball-wise, I think this is one of those things where it's easy to kind of hold [off] when you're going to be out for a long time," Stevens explained. "You're excited because you anticipate a full recovery but I think it's really important to just be active, be as active as you can.

"I called Frank Vogel the day I drove to the gym when we played Milwaukee and just asked him 'what were some of the things that Paul did in his year off that you would really encourage? What are some of the things that we should be looking at?' and you know hey, he's gonna be the best guy shooting out of a chair with his left hand, with his right hand, you know -- perfect his form. Let's have fun. Let's come up with creative ways to attack this."

Did Vogel give you some fun ideas?


"There were a few," Stevens said with a smile. "And he was talking about Paul's chair-shooting being one of them."

There still isn't a timetable set for Hayward. Although Stevens did point out a five-month rehabilitation window, that doesn't necessarily mean we'll see Hayward in uniform come March. He will most likely be able to finally step foot onto a basketball court by then but being gametime-ready will be a completely different task.

Either way, that's way down the road. Stevens' primary focus right now when it comes to Hayward will be to keep him positive mentally as he slowly works his way back.