Kyrie Irving is excited for Opening Night, tired of being asked, 'Why did you want to leave Cleveland?' 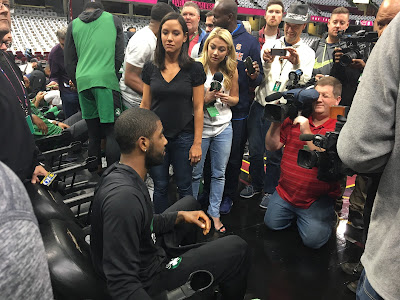 Less than eight hours before his Celtics debut against his former team, Kyrie Irving was asked the same two questions he's been trying to avoid since he was sent to Boston.

'Why did you want out of Cleveland?' and 'What happened between you and LeBron James?'

After three consecutive trips to the finals and one title, it's uncommon to see an All-Star want out of playing alongside LeBron James. Irving hasn't given a clear response about how he feels towards his former teammate and doesn't plan on doing it anytime soon.

At Tuesday's shootaround, his response to the two most common questions was again left for interpretation while making it clear that he's ready to move on.


"Guys, going forward, I kind of wanted to put that to rest," Irving said. "Everyone figuring out or trying to figure out or dive in and continue to dive in to a narrative they have no idea about, and that probably will never ever be divulged, because it's not important. This was literally just a decision that I wanted to make solely based on my happiness and pushing my career forward. I don't want to pinpoint anything, I will never pinpoint anything because it's not what real grownups do. They continue to move on with their life, they continue to progress, and that's what I'm in the NBA to do."

Irving was of course anticipating these kind of questions as he gears up to take on his former team and it didn't take away the excitement he's feeling in getting ready to make his Celtics debut; he considers it a blessing.


"I'm just happy to get the season started, regardless of who we play," Irving explained. "Obviously, it's made a much bigger deal because it's the Cleveland Cavaliers. The situation that happened this summer and being part of a great trade. I'm just truly appreciative of having the opportunity to play this game on the biggest stage and be back here in Cleveland to start the season, it feel different but I'm ready to get started."

Cleveland will show its appreciation for Irving with a tribute video thanking him for the past six seasons. Although he replied "no" when asked if coming into the Quicken Loans Arena as a member of the Celtics was surreal, he did however, expressed his gratitude for being honored.


"It's a great honor and truly appreciative of all individuals who put the video together," Irving said. "Those special relationships don't go anywhere; just excited to see a lot of old friends and get on with the game."