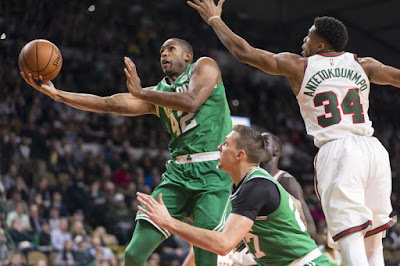 Al Horford and Kyrie Irving spoiled the Bucks' 'Throwback Thursday' night, while leading the Celtics to a 96-89 victory. The two franchises played at the legendary UW-Milwaukee Partner Arena, formerly known as the MECCA, for the first time since 1988.

Horford finished with a vintage stat-line of 27 points on 11-14 shooting (including going 4-5 from behind the arc), 9 rebounds and 4 assists. Kyrie Irving, who dribbled-danced his way through doubled teams for most of the night added 24 points and 7 assists.

Aron Baynes chipped in 12 points, 7 rebounds off the bench and Jayson Tatum also scored 12 points. Jaylen Brown struggled from the field, going 2-10 but contributed with 9 points and 9 rebounds in the Celtics third straight win.

Giannis Antetokounmpo led all scorers with 28 points, to go along with 10 rebounds and 7 assists for the Bucks, who are now 3-2 on the young season. Malcom Brogdon finished with 15 points, 6 rebounds and 5 assists, while Khris Middleton also added 15 points in the loss.

Milwaukee led at intermission 44-43 behind 'The Greek Freak,' who only scored 11 points in the first 24 minutes, but started taking it aggressively to the hoop to begin the second half.

With 4:14 remaining in the third quarter, the Celtics were trailing 63-57, before Al Horford capped an 8-0 run with back-to-back 3-pointers to put the C's up by two, entering the final frame.

Boston led by as many as 12 points in the fourth period and they never surrendered their lead, despite the Bucks cutting the deficit to six on back-to-back Tony Snell (11 points) 3-balls and later on after a Brogdon layup that had Milwaukee down five with less than four minutes to play.

Horford once again proved why he has been the best overall player for the Celtics during their mini three-game win streak.


"He was great on both ends of the floor," Celtics coach Brad Stevens said. "He guarded Giannis a large part of the night and I thought did a great job on him and then he obviously hit the big 3s."

The Celtics will look to keep their momentum going when they travel to Miami to face old friends Kelly Olynyk and Jordan Mickey. Tip-off against the Heat is on Saturday night beginning at 8.

Marcus Smart, who returned to the Celtics lineup after missing the last two games with injuries to both of his ankles, finished with 8 points (2-10 shooting from the field) and 4 assists in 27 minutes off the bench. Daniel Theis made his first NBA start grabbing 5 rebounds, while going scoreless in 19 minutes of action.

The Bucks celebrated the 50th anniversary of the UW-Milwaukee Partner Arena (where they called home between 1968-88) by choosing to play one regular season matchup in the 11,000 capacity stadium, dubbing it the 'Return to the MECCA' game,  on Thursday night. The sold-out crowd and those watching on the TNT broadcast, got to enjoy a replica of the old school, multi-colored parquet.

Alfredo 'Tito' Horford, who is Al Horford's father, was drafted by the Bucks back in 1988 with the No. 39 pick. The seven-footer went on to play only two seasons in Milwaukee.