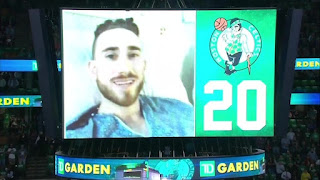 After Gordon Hayward underwent surgery to repair his left ankle Wednesday night, ESPN's Adrian Wojnarowski reported that it's unlikely the All-Star forward will be returning to the floor this season, according to his agent, Mark Bartelstein.


Hayward, who suffered from a dislocated left ankle and a fractured tibia on Tuesday night in Cleveland, had a successful surgery, according to Bartelstein, but will most likely spend the 2017-18 season rehabbing rather than joining his teammates.

"We expect him to make a full recovery and return to his All-Star form," Bartelstein said.

Hayward's father, Gordon Scott, updated the status of his son's surgery Thursday morning via Twitter -- confirming it was a success.

In a video that was taped from his hospital bed, Hayward thanked Celtics fans for all of the support he's received since Tuesday night. The video aired prior to tip-off Tuesday night on the jumbotron and was met with a roaring applause from fans at TD Garden before the home opener against the Bucks.


"What's up, everybody? I just wanted to say thank you to everyone who has kept me in their thoughts and prayers," Hayward said to a rocking Celtics crowd. "I'm goin gto be all right. It's hurting me that I can't be there for the home opener; I want nothing more just to be with my teammates and walk onto that floors tonight. I'll be supporting you guys from here. I wish you the best of luck. Kill it tonight."

Marcus Smart, who was scheduled to address the crowd for the start of the season, redirected their attention to the big screen -- where Hayward's video began.

If Hayward is eventually ruled out for the regular season, the Celtics can exercise an $8.4 million disabled player exception, which can be used to sign a free agent or via trade, if the Celtics ultimately decide to rule out Hayward for the year.

Celtics, 0-2, are off to a slow start without Hayward but will look to bounce back Friday night in Philadelphia against the 76ers.