Report: Celtics will most likely not extend Marcus Smart's contract 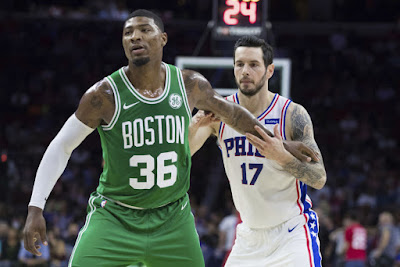 The Celtics will not be inking Marcus Smart to a contract extension before Monday's deadline, according to Adam Himmelsbach of the Boston Globe.

Both sides failed to come to terms on an extension, and are not expected to do so anytime soon. Sources told the Boston Globe that Smart's agent Happy Walters and Celtics president of basketball operations Danny Ainge came up short in finalizing a long-term deal, thus, making Smart a restricted free agent next summer unless the two sides can come to an agreement before the end of Monday.

League sources believe that's unlikely to happen. Chances are the longest-tenured Celtic will have the option of accepting the $6 million offer that will keep him in Boston through the 2018-19 season, unless another team offers more for Smart's services -- which the Celtics will still be able to match.

Smart, who has already expressed his desire to be a part of the Celtics' long-term plans, will look to reprise his 6th man role this season and gotten off to a good on and off the court. The four-year guard entered training camp 20 pounds lighter, has shown improvement in his offensive efficiency and hasn't lost a step on the defensive side.

In four preseason games, he averaged 10.3 points, shot 57.1 percent from the floor to go with his 3.8 rebounds and 1.5 steals per contest.