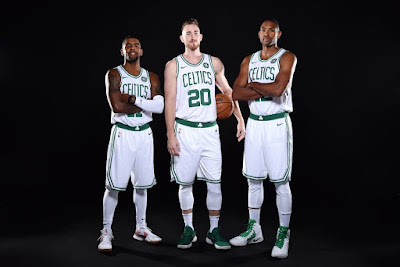 Another NBA season is upon us and we on Causeway Street have your 2017-18 Celtics covered with our annual preview and predictions.

For the first time in three years the Celtics have more than one option for it's team MVP. Isaiah Thomas had been the runaway stud that the Celtics revolved around since his arrival in early 2015.

However, with his departure the opportunity for a number of players to step up and claim the Boston franchise as their own is indeed intriguing. That said, Kyrie is the new king. With a similar stat line to Thomas in 2016-17 in a 'second' option role with the Cleveland Cavaliers, Kyrie is poised to reach new heights under Brad Stevens and his version of the 'space and pace' offense.

Look for Irving to set career highs in assists and points per game. He will have the ball in his hands as much as he ever has and will be the focal point to one of the game’s most exciting offenses. Don’t count him out for league MVP as well….

The 2017-18 Celtics won’t be breaking any wins total records but this team should be good, very good. While the talent pool may be as deep as it ever has in the Brad Stevens era, Stevens will need to get this group to gel as fast as possible. With eleven new faces in the locker room it won’t be easy but the plethora of talent should have Boston posting it's best record since the “Big 3” era.

Boston will have three main keys to it's success:

3. Not worrying about personal agendas (that means you Kyrie)

To some this might sound crazy; others are going to say 'duh.' Fact of the matter is Jaylen Brown is set to play a TON this season with on both the second unit and in a starting role. His minutes, shot attempts, and overall role should expand exponentially in year two leading to production that should remind everyone of a certain small forward who didn’t love the 'Green Teamers' cheering for Gordie Hayward at the Garden.

Brown’s expanded role should come with 30-plus additional starts to his rookie total, leaving him with 55-plus depending on when Stevens wants to use Marcus Smart as a defensive stopper. If Jaylen develops on the defensive end of the floor as much as he is capable of, watch out.

It’s a tall task but Brown should be more than capable of filling in a majority of the minutes left behind by either Avery Bradley or Jae Crowder and should be very good in the process. Expect him to see between 26 and 28 minutes a night and out do Crowder’s 14.99 PER from last season.

Just when we thought the Western Conference was becoming the boring conference. Expect to see a rematch of the 2016-17 ECF with Cleveland getting the first seed this time. That first seed…will be the difference. Cavs in seven.

While Boston may have had one of the best offseasons in recent memory, OKC may have done even better. The additions of Carmelo Anthony and Paul George are monumental in pushing the Thunder into the WCF for me. George is playing as a 'second' option next to reigning MVP Russell Westbrook (insane) and they managed to add a motivated Carmelo Anthony to the mix as well (totally insane). I won’t say that this is enough to make them clear cut favorites to dethrone the Warriors out west but I’m sure Steph Curry, Klay Thompson and Kevin Durant aren’t sleeping any better.

Golden State on the other hand, returns the 'super team' of a year ago and should remain the Western Conference’s biggest mountain to climb. Short of injury, the Warriors are going back to the Finals. HOWEVER, don’t be shocked to see some playoff regression via losses in the first few rounds. This team is still as talented as any we’ve ever seen but will they be as hungry and/or healthy? Warriors in six.

It may sound crazy, but this might be the last year the Warriors sit on top the food chain. With a massive repeater salary cap tax staring them in the face, Golden State will likely need to choose if they want to risk paying a tax that would put them in the red financially or deal away the likes of a Draymond Green or Klay Thompson next offseason.

With a loss of that size looming, expect the Warriors to kick it into high gear come Finals time and take out LeBron and the Cavs one last time. These Finals will be much more tightly contested then last year but expect Durant and Curry to go crazy and do all they can to avoid a Game 7. Warriors in six.

Yes, Kyrie Irving will get the 'oohs and aahs' with his dynamic dribble drives, but Hayward will be the glue guy. Plus, look at Hayward's Wife, Robin. #YouDaRealMVP

Despite all the changes, the Celtics record will be the same from a season ago.

The Celtics get their revenge from a year ago over the rival Cleveland Cavaliers, but it will take seven games to finally get over the hump

The East Finals will be the beloved Celtics versus the-former-beloved-Celtics-turned Cavaliers. Celtics win in Game 7, causing the NBA universe to delve deep into the LeBron to LAL/HOU/MIA rumors.

Dub Nation (shocker) will take care of the new looked OKC Thunder for a second time in three seasons. The Warriors will advance to their fourth straight NBA Finals in six games.

Golden State wins back-to-back titles (third in four seasons), and will only need five games to do it against the Celtics (while I spend a full paycheck on C's-Dubs Game 3 tickets at the Gahhden).

While Irving has refused to explain the exact reason(s) for wanting out of Cleveland, what's clear is he wanted to be a focal point of a team and not be a No. 2 option anymore. With that being said, there's no better place to prove you can lead a team to the promise land than in Boston, with the NBA's most storied franchise.

Irving will have more to prove this season with the Celtics than any other year of his NBA career. Having two other All-Stars not named LeBron, or Kevin Love as teammates, should help his case be an actual point guard and not just another scoring option. I believe Irving will be a dark horse league MVP candidate as well.

Also look out for Al Horford having a monster season, and a return to the All-Star Game next February, as he's the only returning Celtics starter in Brad Stevens lineup from the 2016-17 campaign.

Though this Celtics squad is much improved offensively, I think they might have lost a step defensively. They'll need second year wing Jaylen Brown, Gordon Hayward, Terry Rozier and Marcus Smart to step up on defense. After watching all four preseason games, it's obvious this team will not have any trouble scoring the basketball, especially shooting the 3-ball.

Unfortunately, I think Boston will lose a few close games due to lack of stops down the stretch, something that were clutch with a season ago with Avery Bradley, Jae Crowder and Smart being the three-headed on ball defending monster that won many games under five points.

With the additions of Aron Baynes and Marcus Morris, the Celtics will need to get back to that hard-noised grittiness, not just pretty dribbling and outside shooting to exceed more than just three additional wins from last season's total.

Whether Smart starts or comes off the bench this season for Brad Stevens, he will turn some heads for award voters in 2017-18. The longest tenured Celtic has dropped 25 pounds and while Danny Ainge did not give the guard a contract extension before the Oct. 16 deadline, Smart will be that much more motivated before becoming a restricted free agent.

If Smart's shot keeps falling and he continues to post up like we saw at crucial points of last spring's Celtics playoff run, he can easily become Boston's third best scorer this season. This could be the year (a contract year nonetheless) Marcus Smart naysayers finally shut up, including myself and give the man his due props.

Celtics will finish with the best record in the East, while the Cavaliers don't care what seed they are come playoff time. But if Isaiah Thomas is healthy and starting, the Cavs will be that much deeper than a season ago, but there's no Kyrie Irving to save the day when LeBron cramps up at some point. This time around I still give the edge to Cleveland but the Celtics fall in a Game 7 at the Garden

Until Pop retires or resigns as the coach of the Spurs, San Antonio always has a shot to make it out of the west. Unfortunately, we'll never know what could have been in last season's WCF between these two teams after the Spurs were up 20 points at Oracle, only to watch Kawhi Leonard get taken out on a dirty Zaza Pachulia close out play in game one of that series. That's right, I'm still calling it dirty!

After losing in seven games (blowing a 3-1 lead) in the 2016 NBA Finals to the Cavs, the Spurs are the only team that can challenge Warriors at full strength, not the Thunder or Rockets, despite their moves this past offseason

For the fourth year in a row, we'll have a Cleveland vs Golden State NBA Final. As deep as I believe the Cavaliers are (the most since LeBron has returned), with more athleticism off their bench than they had a year ago (Deron Williams, Richard Jefferson and Derrick Williams vs J.R. Smith, Jeff Green and Tristian Thompson), the Warriors, barring any injuries will repeat as NBA champs. It won't be as easy as it was in 2017, but that's why you play for home-court advantage, to hoist the  Larry O'Brien trophy at the end of a Game 7.

The Warriors better enjoy it, because they can't continue to ignore the luxury tax ghost that will begin to haunt them even more starting next season.

Agree or disagree with our predictions? Hit us up on Twitter and tells some of your hot takes for the 2017-18 NBA season