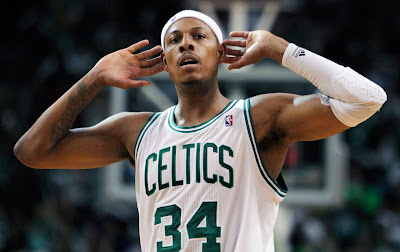 It's been 20 years since the NBA came up with it's 50 greatest players list, during the 1997 All-Star game in Cleveland. Since then, there has been many debates and conversations on the 'next 10' greatest or a revised version of the original chosen few.

On Friday, ESPN's The Undefeated released an updated or a "remix" of the NBA's 50 greatest players. They made 14 changes from the original batch, while adding the likes of LeBron James, Allen Iverson, Tim Duncan and Kobe Bryant, among others.

Other noteworthy changes the four-letter network have made to the updated list, include six Celtics player being cut, while adding three former C's players to the 'new' list.

Despite Pierce, Garnett and Allen not playing their entire career in Celtics green, they brought a championship to Boston after a 22-year drought in 2008, to a new generation of sports fans in Boston, while accomplishing other feats during their almost two decades in the NBA.

In Pierce's case, a much deserved honor for his 15-years of 'blood, sweat and tears,' as one of the greatest Celtic to ever play. His overall accolades speak for themselves after 19 years in the the NBA as one of the best pure scorers in league history.

Pierce will have his No. 34 retired by the Celtics on Feb. 11, against the Cavaliers at the TD Garden.

What do you think of the new list, or the ex-Celtics that were added and deleted?


Get familiar with the #NewNBA50 - an updated list of the best ballers of all-time. https://t.co/0nlGYItTBD pic.twitter.com/KEcZScKhJH
— The Undefeated (@TheUndefeated) October 20, 2017