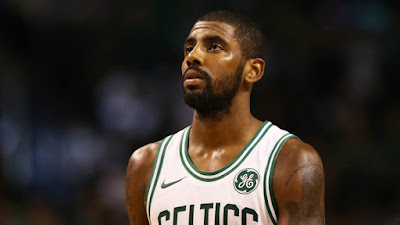 Riding high on a five-game winning streak, the Celtics have found success over the past two weeks, success that starts and ends with their All-Star point guard, Kyrie Irving.

Monday night's 108-94 win over the Spurs was just another example of how much Irving can impact a game on both ends of the floor. Finishing with a game-high plus-25 player rating, Irving continues to prove why he's the Celtics' most important player.

With seven games under his belt, he has found ways to get the best out of his youngsters while providing productive offense in spurts that have made all the difference in the win column. His eight points in the opening three minutes of the third quarter Monday led to a double-digit lead that the Spurs never came back from. This performance was followed by another second half offensive eruption out of Irving, who poured in nine of the Celtics' last 10 points in Miami to top off the Heat last Saturday.

In a system that's predicated on ball movement over isolation scoring, Irving is buying into Stevens' system and it's already paid dividends. That is if you're paying attention to the games.

If you glance at Irving's assist column in the box score, you won't be wowed by his six dimes and look at his mini scoring outbursts as his only contribution to the Stevens' offense. However, in-game observations tell a different story. Irving is a magnetic force for opponent's defensive coverage but his knack for facilitating the Celtics' ball rotations while he's constantly moving away from the ball has caused fits.

It's paying off for guys like Jaylen Brown (18 points on 6-of-11 from the field) and Al Horford (14 points on 7-of-11) -- both are getting a lot more open looks and plenty of space thanks to their new starting point guard, who reflected on the adjustments he's made this year.


"I felt like I had to adjust, that was probably the biggest thing coming in [to Boston] and even playing pick up with those guys in the beginning -- they have a team-oriented at all times vibe and culture here and I've had to adjust my individual talent to the greater good of the group," Irving explained. "I feel like that has been going a lot better than even I expected because of the guys that we have in this locker room -- they make it a lot easier for me to adjust myself."

The adjustments started on the offensive end but that's not where they end. The Irving effect has trickled over to the defensive end -- where he's averaging 2.4 steals on the season and one block in each of his last three games -- and it hasn't gone unnoticed by his head coach.


"He's playing both ends of the floor really well, and when you're guarding all those high screens in the NBA, that's not easy," Stevens explained. "He's doing a good job of knowing when to peel back and switch. He's doing a good job of chasing when he needs to chase, he stays in plays, he gets his hands on balls; he got a couple more balls tonight. I think we can continue to get better at finding him on offense and figuring out what our spots are for him, but you can tell he's getting more comfortable every time he takes the floor."

The Celtics are currently one of the best defensive teams in the league -- second in fewest points allowed (94.9) with the second-best defensive efficiency (0.951) rating.

Sitting atop of the Eastern Conference (5-2), the Celtics have looked better than most would have anticipated in the late hours of Oct. 17. The loss of Gordon Hayward left many wondering if the Irving-Horford duo, along with Brown and rookie Jayson Tatum would be enough to push Boston into the upper echelon of the east but very few could have predicted what has transpired in the opening weeks of the 2017-18 campaign.

The Celtics are rolling and the Cavaliers look awful. In the midst of a 3-4 start, Cleveland found themselves on the wrong end of three blowout losses, including one to the lowly Magic (114-93) and the most recently against Knicks (114-95).

Fittingly so, Irving embracing his newfound culture has pushed his team ahead of the Cavaliers -- something Celtics fans hope will be the case after the next 75 games.