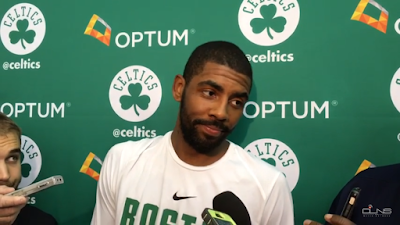 After his brief exchange in Philadelphia with a 76ers fan went viral Friday night, Kyrie Irving showed no remorse for his lewd comments when he was asked about it at the Celtics practice facility in Waltham on Saturday.

The incident was captured on video when Irving and the Celtics were heading into the locker room at halftime.

Irving responded with a vile suggestion.

Irving says he has talked to the league about the incident and is ready to move on. But does he regret the exchange?


"Hell no," Irving said. "Man enough to record it on video, that's on him. I'm glad he got his ad name out there, and his five seconds of fame and it's gone viral. That's the social media platform we live on.

"I take full responsibility for what I said. You move on."

The NBA hasn't officially announced a fine for Irving which will most likely happen sometime in the near future.

The NBA has fined Kyrie Irving $25,000 for his explicit comment to a fan


You can watch Irving's response to the incident in the video below: