Danny Ainge on Isaiah Thomas' comments: 'I understand his sentiments, he was a great Celtic' 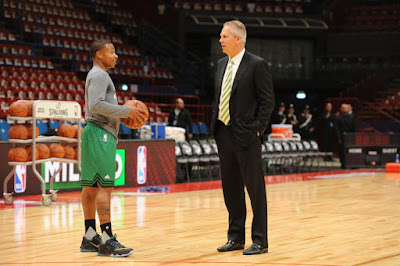 Cavaliers All-Star Isaiah Thomas didn't hold back in a recent interview with Sports Illustrated, when it came to how he felt about being traded from the Celtics in August.

From going as far as saying he should have not played during the Celtics postseason run to the Eastern Conferance Finals (due to his injured hip) to stating that he would not be speaking to Danny Ainge ever again.

"Boston is going to be all love," Thomas said. "I might not ever talk to Danny [Ainge] again. That might not happen. I'll talk to everybody else. But what he did, knowing everything I went through, you don't do that, bro. That's not right. I'm not saying eff you. But every team in this situation come out a year or two later and says, 'We made a mistake.' That's what they'll say, too."

Ainge was informed of Thomas' comments just a short time after the article went viral late Wednesday morning, only to take the high road and wish his former starting point guard well.


"You know that's the hard part of the job," Ainge said. "I mean, I know there is a lot of feelings that go on when these type of things happen. I was player that was traded twice so I understand his sentiments, but you guys know how much I love Isaiah. He's a great kid and I wish him the best."

While you might say Thomas is being petty or maybe you believe he has a right to feel the way he does, especially after the death of his sister and playing through an injury for the Celtics during the playoffs last spring, but with Ainge there seems to be no love lost on his part


"I mean, he was a great Celtic," Ainge said. "Everybody that watched him play or has been with him in the locker room for the last few years will remember how great he was. He will be a part of Celtic history forever."

When asked if Ainge would want to patch things up with the disgruntled Thomas, the Celtics president of basketball operations knows that could take some time to fix.


"I don't know. I mean, I would try to, but I have no idea," Ainge said. "That takes two people and obviously, he said things today and has strong emotions and I understand those."

Ainge has not spoken to Thomas since the initial phone call he made to the veteran, letting him know he had been dealt to the Cavaliers.

Obviously don't tell Thomas that 'all is fair in love and basketball,' because he clearly doesn't want to hear that.

But maybe Ainge and Thomas find a way to hug it out as the Celtics head to Cleveland next week before their season opener on Tuesday night, wouldn't that put this to bed?

So much for some wishful thinking.