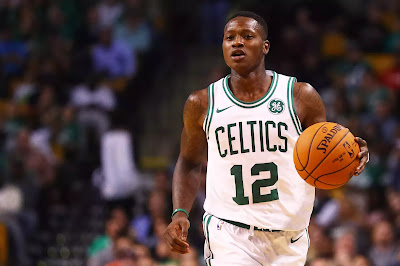 There weren't a lot of positive takeaways from the Celtics' 108-100 loss against the Bucks on Wednesday.

Bucks forward Giannis Antetokunmpo had his way against the Celtics' lackluster defense, Kyrie Irving (7-of-25) and Marcus Smart (4-of-13) combined for a woeful 11-for-38 from the field and for the second consecutive night Boston blew a fourth-quarter lead. But one of the few bright spots of the evening for the Celtics came from their bench.

He clocked in 26 minutes against Milwaukee, and will be seeing more of the same moving forward. Rozier has accepted his newfound role and took responsibility for some of the Celtics' missteps against the Bucks.


"I gotta come off the bench, step up and make sure the guys that come off the bench with me are all on the same page," Rozier said. "Like I told a couple of guys, it was my fault that we didn't capitalize on a couple of plays tonight. I gotta do a better job of making sure everyone's in the right position and that I'm yelling out the plays."

Since the start of training camp, Rozier has shown he's a capable secondary scorer, facilitator and defender for the Celtics -- something Stevens is desperately searching for out of his second unit. With Smart starting, the bench is all of a sudden a lot younger and inexperienced.

Stevens played four rookies in Wednesday night's loss, including Abdel Nader, Semi Ojeleye and Daniel Theis, and until he figures out a rotation he can stick with that's going to be the norm for the time being. The only consistent offensive weapon Stevens can confidently rely on off his bench is Rozier.

Since the start of preseason, Rozier has shown signs of improvement. His ball handling skill has always been a staple of his game but unlike last season, this year he's refined his craft -- eliminating turnovers and finishing at the rim.

In the past, Rozier never had trouble blowing past his defenders, it was when he would miss contested layups or lose control of the ball that often drove Celtics fans nuts. This new and improved Rozier is in position to lead the second unit, and relieve Irving and Smart by playing 20-plus minutes every night.


"We messed up on a lot of plays," Rozier said. "That can't happen. Like (Stevens) said after the game: 'We're professionals, so we better learn the plays or we won't play.'"