Isaiah Thomas: 'I might not ever talk to Danny [Ainge] again' 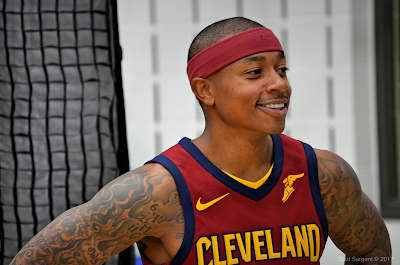 Former Celtics All-Star Isaiah Thomas is still coming to grips with the summer blockbuster deal that landed him in Cleveland.

In a recent interview with Sports Illustrated's Lee Jenkins, Thomas revealed that he may not ever talk to Celtics president of basketball operations Danny Ainge again, and that he shouldn't have played a single game of the postseason.

Thomas, who played 15 games during the Celtics' 2017 playoff run, left Game 2 of the Eastern Conference Finals due to a hip injury that forced the team to shut him down for the season. Thomas believes playing in those postseason games only made matters worse.


"No doubt about it, I should have sat out the playoffs," Thomas explained. "Now way around it, I made it worse."

After hip specialist Bryan Kelly advised him to rest his hip for six weeks instead of undergoing surgery, it was ultimately decided that he could work his way back through rehab. However, the most unexpected news over the summer -- a blockbuster swap between the two Eastern Conference heavyweights, involving All-Star point guards Thomas and Kyrie Irving -- dramatically changed Thomas' mindset heading into the 2017-18 season.

For Thomas, the pain of being dealt to the Cavaliers still stings. It's not the first time he's been dealt to another team in his NBA career, but this one was personal.

According to Thomas, he had a 'F---- Sacramento' attitude when he played against them after they chose not to extend his contract back in 2014 and when Phoenix dealt him to the Celtics, it was a 'O.K., now they're gonna get it' kind-of-swag whenever he faced the Suns.

Thomas' love for Boston is still heavy, he says but there's still one caveat here.


"Boston is going to be all love," Thomas said. "I might not ever talk to Danny [Ainge] again. That might not happen. I'll talk to everybody else. But what he did, knowing everything I went through, you don't do that, bro. That's not right. I'm not saying eff you. But every team in this situation come out a year or two later and says, 'We made a mistake.' That's what they'll say, too."

Thomas has never been shy when it comes to expressing his honest feelings, clearly (and understandably so) he has a legitimate reason to be upset with Ainge. Thomas not only played through emotional distress due to the loss of his late sister Chyna, but he also played through his labrum injury in his hip from when he hurt it back in March against the Timberwolves, when Karl Anthony Towns stepped on it.

He later re-aggravated the hip in the playoffs. Thomas also helped recruit free agent Al Horford in 2016 and Gordon Hayward months before he was dealt.

He has every reason to feel betrayed, now the Celtics will have to take down Thomas, along with LeBron James, Kevin Love and the rest of the Cavaliers. And if James decides to re-sign with Cleveland in 2018, the Cavs could very well stand in front of the Celtics' way of returning to the NBA Finals for the foreseeable future -- a plan Thomas, of course, hope comes to fruition.

When asked about how he felt the Celtics will perform this year, Thomas pointed out their talent while adding that they still lost a lot from last year's roster.


"They've got really good players and a great coach," Thomas said. "But it takes more than talent. They lost a lot of heart and soul."

Alluding to the loss of Jae Crowder, who was also shipped to Cleveland, Avery Bradley and of course himself, Thomas makes a valid point. Boston lost its two lock-down defenders in Bradley and Crowder but will look to bounce back with the acquisition of Marcus Morris and the return of Marcus Smart, who is now the longest-tenured member of the Celtics.

In the meantime, Thomas is all about the slow grind before hitting the floor in a Cavaliers uniform. He's expected to return from his injury in late-December/early-January but is planning on coming back ahead of schedule.

One thing that's almost certain is Thomas' return to Boston, when the Cavs take on the Celtics on Jan. 3. That's when Thomas will most likely revert to his 'O.K., now they're gonna get it' mantra against his former team.