Celtics beat the Hornets 108-100 to wrap up preseason undefeated 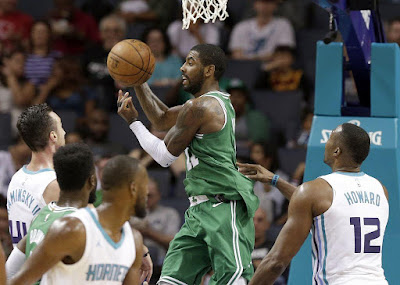 The All-Star trio of Kyrie Irving, Gordon Hayward and Al Horford proved why they'll be the ones to set the example for their teammates, after leading the Celtics to a 108-100 preseason finale victory over the Hornets at the Spectrum Center on Wednesday night.

Irving, who along with Hayward and Horford had the night off in the Celtics win over the 76ers on Monday, the point guard finished with 16 points (shot 7-of-11 from the field), 10 assists (no turnovers) and 5 rebounds in 27 minutes of action.

Horford added 15 points, 8 rebounds and 5 assists for Boston. Hayward chipped in 13 points, 6 rebounds and 4 assists, while Jaylen Brown contributed with 12 points, 4 rebounds and 2 blocks in the win that wrapped the Celtics preseason with a record of 4-0.

Boston opened the first quarter with a 22-12 lead before the Hornets made it 24-20 after one. Malik Monk would hit a go-ahead three-ball to give Charlotte it's only lead of the game at 29-28 to start the second period. The Celtics responded with a 15-5 run and never looked back, taking a 57-38 advantage into the half.

The Hornets made it interesting in the final frame while all of the Celtics starters were on the bench, Shane Larkin sealed the victory with a 3-point play with 45.5 seconds remaining, followed by a driving lay-up with 12.7 seconds left on the clock for the game.

The Celtics shot 50.6 percent from the floor, including hitting 16-of-32 from behind the arc. Boston also finished with 26 assists on 43 made baskets on the night.

Marcus Morris made his Celtics preseason debut, in 11 minutes the forward scored 7 points on 3-of-6 shots from the field.

Boston will travel to Cleveland on Monday to prepare for their regular season opener against the Cavaliers. Tip-off is at 8, Tuesday night on TNT