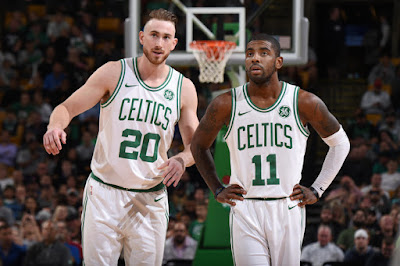 It was the first-look at their revamped team and the anticipation was high as Kyrie Irving, Gordon Hayward and nine of their teammates donned their new uniforms for the first time on the parquet.

It didn't take long for Irving to wow the crowd at TD Garden -- he drained a mid-range jump shot, displayed his sharp handles and threw down a loud finish that brought the crowd to their feet. Hayward, who shot a modest 2-for-6 from the floor, drained his first field-goal with his foot on the 3-point arc and followed it up with a backdoor-cutting layup, assisted by Al Horford.

The Celtics grabbed a quick 10-point first-quarter lead that dwindled down to three just before the start of the second quarter and eventually defeated the Hornets, 94-82. But for a team that's looking to find some continuity before the regular season, the score didn't mean a lot to Brad Stevens and the Celtics.

In the second half, all eyes were focused on the Celtics' youngsters. Led by third overall pick Jayson Tatum, who clocked in a game-high 32 minutes, Boston's hopefuls were on display and didn't disappoint -- specifically, German import Daniel Theis.

In merely 13 minutes, the 23-year-old forward impressively stuffed his stat line in every which way he could. Theis damn near flirted with a double-double, scoring a dozen points and pulling down 7 rebounds.

He showed his range by knocking in a 3-pointer and his ability to get to the hoop. Theis even had enough time to dish out three assists, grab a steal and swat his first NBA block.


"I thought he did really good," Stevens said. "He was quick to the rim, and we needed that. Getting behind on rolls, got his hands on a couple of balls and kept them alive, had the tip dunk at the end of the quarter off of the roll, and that's what he does best. He can shoot the ball, he can play in space, but he's very quick to the rim."

The German product has been a professional athlete since his teenage years. The Celtics signed him over the summer to a two-year deal, with the first year of Theis' contract fully guaranteed.

As for Tatum, the rookie got off to a slow start in the first half but found some momentum in the fourth quarter when he hit a jump shot over Kemba Walker. He then beat two defenders off the dribble and hit a floater and converted a layup in the paint.

Stevens expected the slow start from his rookie, he said after the game -- explaining that the first preseason game is always filled with so much excitement for a top prospect who's anxious to face an NBA team for the first time.

Celtics will play their second contest of their four-game exhibition schedule on Friday at Philadelphia.