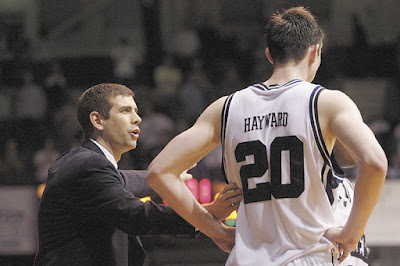 After three days in Newport, Rhode Island for the start of training camp, Celtics point guard Kyrie Irving has already taken away one thing from this past week; Gordon Hayward and Brad Steven have picked up right where they left off seven years ago.


“When you watch and you observe, and then you have a few days to be on the court with [Hayward], you understand how high his basketball IQ is and the understanding what him and Brad have,” Irving said. “They have an unspoken language already between one another.”

Hayward was quick to dismiss that he and Stevens can read each other's minds, but the two do share a history when it comes to their player-coach bond that is not always easy to build in today's NBA.


“It helps just a little bit because we have some familiarity,” Hayward admitted. “But I wouldn’t go as far to say that we have silent communication. For me, just trying to still adjust to the system, adjust to the way we play here, and adjust to my teammates.”

Stevens, who was Hayward's coach at Butler University, was a huge reason the All-Star chose to sign in Boston this offseason. It's clear that their relationship is getting noticed by the rest of Hayward's teammates, which should help the Celtics form an organic chemistry.


“See, I never try to do that – to accelerate chemistry – because that’s just going to come once we build more time with one another,” Irving said. “We get to be on the floor a lot more. It’s my duty and part of my job to integrate myself in that as well. Not only with Brad and the rest of my teammates, but more importantly Al and Gordon, to really set the standard of how we want to play this year. Because we’re going to to be leaning on each other a lot. It starts with us and then you get to the other guys and then we develop that chemistry going.”

While Irving begins to build his own relationship with Stevens, it's clear the Celtics star is buying into his coach's position-less system and he can't wait to get the season underway.

The Celtics will host the Charlotte Hornets on Monday Oct. 2, when their preseason tips-off.