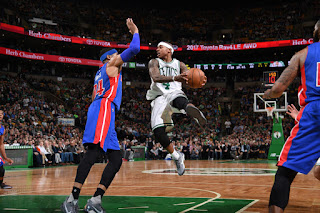 In a game where their opponent's offense put on a masterful performance, the Celtics kept things close throughout but ultimately faltered in a 121-114 loss at TD Garden.

The Celtics took a 92-84 deficit into the fourth quarter but used a 9-0 run to rally back -- grabbing their first lead of the game since the beginning of the first quarter.

The C's managed to pull off the run with Isaiah Thomas looking on from the bench but before he checked back in the Pistons went off on a 11-2 run -- giving them a 103-95 lead with 5:08 left.

From there, the Celtics pulled within four points with 15.9 seconds left but failed to make it a one-possession game. Detroit handed the C's their second loss in three games.

Thomas shot 50 percent from the floor en route to a team-high 27 points (10-of-20), Kelly Olynyk (19 points) had another productive offensive night off the bench and Jae Crowder finished with 14 points.

The Celtics were on the Pistons' heels throughout the first half but failed in trying to pull ahead. It seemed like for every field goal made by the Celtics, the Pistons responded with a couple of shots of their own. They also did a good job of scoring off of the Celtics' missed shots.

Despite shooting over 50-percent from the floor, the Pistons took a modest four-point lead (59-53) into halftime. However, the Pistons' offense didn't cool off after the break as they dropped 33 points in the third quarter while shooting 63.6 percent.

It looked like the C's were locked in when they pulled ahead in the fourth quarter but the Pistons' 11-2 run was too much for them to overcome.

Detroit shot above 50 percent (55.2) with all five starters finishing with at least 19 points or more.

Celtics will look to bounce back when they host the Kings at TD Garden on Friday.

The Celtics started off with an inside/outside offensive attack -- using their big men in the paint to draw in the defense and kick the ball out to their shooters. Al Horford was able to get a few shots going early but his touches faded away in the second half. Horford finished with 9 points on 3-of-5 attempts, including 1-of-2 from deep.