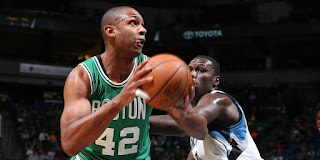 The Celtics' fourth-quarter rally was an epic one.

After the Timberwolves grabbed a 15-point lead towards the end of the third quarter, the Celtics responded with their best offensive run of the season as they cruised to a 99-93 win in Minnesota.

The C's carried a 19-0 run into the fourth quarter and pulled ahead with ease by outscoring Minnesota, 31-12 in the final 12 minutes. They improve to 8-6 after a hard-fought win -- one of their most impressive victories of the season.

The Timberwolves ended the first half on a 14-4 run that gave them a 10-point lead (52-42) at the break. They commanded the pace after halftime as they were able to out-rebound their opponent while consistently scoring in the paint.

Minnesota out-rebounded the Celtics 51-39, including 16 offensive rebounds -- which they turned into 17 second chance points. They also finished with 58 points in the paint.

Timberwolves closed out the third quarter on an 8-2 run as the Celtics faced a 13-point deficit to start the final frame. While making defensive stops on one end of the floor -- holding Minnesota scoreless for the first seven minutes of the fourth quarter -- the C's found their offensive rhythm on the other end -- where they went on a 19-0 run.

Alongside Horford, the C's bench crew -- Marcus Smart, Terry Rozier, Jaylen Brown and Jonas Jerebko -- took control of the game as they managed to turn a 81-66 Timberwolves lead into a six-point advantage (85-81) with five minutes left to play. From there, the starters rejoined Horford and held off the Timberwolves, 14-12, protecting the lead that was built behind the humongous scoring run.

The Celtics will look to sweep their three-game road trip on Wednesday when they travel to Brooklyn to take on the Nets.

The Celtics bench combined for 31 points as they led their team to a huge fourth-quarter run and Rozier's 12 points, including 2-of-4 from deep, certainly made a difference. He was aggressive throughout the night -- attacking the hoop, pulling down boards (4 rebounds) and had a pivotal steal that ended with a dunk on the other end and helped stretch the C's 19-0 run.