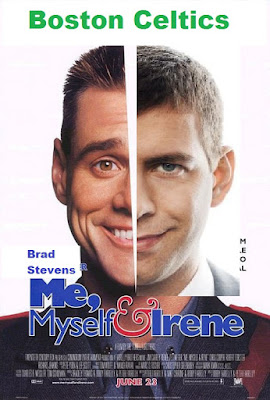 This version of the Boston Celtics that we've seen so far through six games can be summed up in one word - unexpected.

The Celtics have a major identity crisis through the first six games of the year. So much so, it's making Jim Carey's performance in Me, Myself, and Irene, look some what sane (arguably the most underrated Jim Carey flick).

The gritty, tough nosed Celtics led by defensive studs like Avery Bradley, Jae Crowder, Marcus Smart, and the addition of Al Horford, were supposed to be wreaking havoc on opponents night in and night out. The MO of last year's team was supposed to carry over. They were going to win 50-plus games on grit and balls alone. 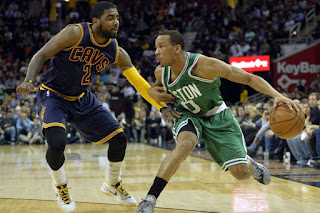 This has not been the case. The Celtics have started the year as the second worst defensive team in the league giving up 111 points per game to their opponents. This has led to their head coach, and fearless leader, Brad Stevens, to go so far as to say they are a finesse team after the debacle against the Denver Nuggets on Sunday night.

The team we are seeing on the court is not what this team was supposed to be.  As frustrating as this is for the Celtics and everyone who is invested in the team, there is the other side of this Dr. Jekyl and Mr. Hyde complex that should make everyone feel a lot better. The Celtics are playing absolutely amazing basketball on the offensive end.

The Celtics are the best shooting team in the NBA through six games.

Let that sink in a little...

The Celtics are shooting 48.7% from the floor so far this year. That is THE BEST IN THE NBA. (I can't stress that enough)

Everyone on the the team, not named Jonas Jerekbo, is shooting above 42 percent on the year.

Also, they rank fifth in the league in 3-point shooting, knocking down 38.7 percent as a team. This is the same team that has Marcus Smart, Jaylen Brown, and Gerald Green on the team, who aren't exactly the most efficient 3-point shooters in the past. 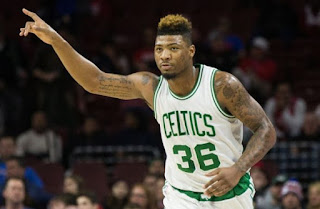 Even if you look at the advanced stats that "tell the real story," the Celtics have been impressive as any team in the league. They are second in the league, behind only Cleveland in Offensive Efficiency scoring 110.7 points per game/per 100 possessions.

The Celtics are fourth in the NBA in True Shooting Percentage, and second in the league in assist ratio. They have truly been an offensive juggernaut any way you want to cut it.

So, the question is can they sustain this other worldly shooting?

The first argument against the Celtics setting new franchise records on the offensive end would be easy; sample size.  (It's been only six games, calm the F*** down, Dutra)

This makes some scientific sense, but I would say to the same critics of their lackluster defensive performance so far through six games, you have to also give them props on the other end as well.

In all seriousness though, if the Celtics can attribute their offensive explosion out of the gate to anything it's the dynamic back court duo of Avery Bradley and Isaiah Thomas.  Not only have they just been pouring in buckets every game this year, they have been extremely efficient. 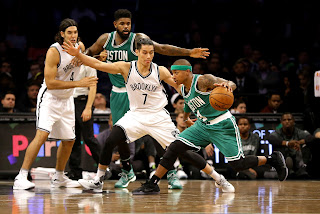 Thomas is shooting 49.5 percent, while Bradley is shooting 48 percent from the field. They are single handily the reason why the Celtics have been the best shooting team in the league. Thomas and Bradley make up 40 percent of the Celtics scoring but it's the way they've done it that's been so impressive.

There is also some credit to be given to Brad Stevens. He has had to go 10-11 men deep nearly every night so far this year, but has yet to have that slow down his teams effectiveness on offense. He has put guys like Tyler Zeller and Amir Johnson, who would never usually be relied upon for a spark offensively, in great spots so far this year. Also, the confidence in Jaylen Brown, who I have to reluctantly admit has been a bright spot offensively this year, has been a key to the Celtics machine like effectiveness.

This is a great sign for the Celtics going forward. Yes, they are 3-3. Yes, they are coming off of one of the most embarrassing losses in recent franchise history. It is obvious they have some deep rooted issues on denfense right now, but all of that SHOULD turn around.

The Celtics are a good defensive team with multiple good-to-great defensive players.

If they can right the ship on defense and show even a semblance of what they did last year - and keep up the offensive production any where close to the pace through the first six games of the year, the rest of the Eastern Conference should be keeping a close eye this borderline schizophrenic Celtics team.