Jae Crowder (sprained left ankle) Expected to miss at least One Week, according to Brad Stevens 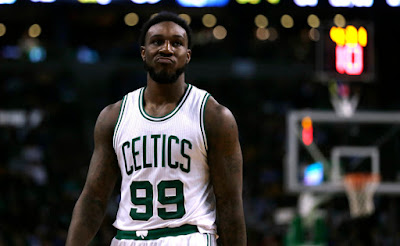 The Celtics will look to build off their 3-1 record without Jae Crowder for at least a week, according to head coach Brad Stevens.

Crowder suffered a left ankle sprain in the second quarter of Wednesday night's 107-100 win over the Bulls at TD Garden. He is the second player in the front court to sustain an injury this week for the Celtics.

Al Horford, who was placed in the NBA's concussion protocol program on Tuesday, will not be making the trip to Cleveland for Thursday night's game against the Cavaliers and Stevens doesn't expect to see Crowder back on the floor in the near future.


"Jae sprained his ankle," Brad Stevens said. "That's all I know. I was told that it would be at least and then we'll see after, but I don;t know we're into it enough to make an assessment on that timeline. It doesn't sound like he'll be back anytime soon."

Crowder came down on Rajon Rondo's foot after making a jumping pass and hit the floor for a moment before he hopped off the court and headed straight to the Celtics locker room.

All-Star Isaiah Thomas knows losing Crowder is a tough blow to his team but reminded everyone that the Celtics were in a similar position last season when the C's were forced to play without their starting small forward.


"[It's] very tough," Thomas said after Wednesday night's win against the Bulls. "Last year we lost a back-to-back and beat the Warriors in their arena without Jae Crowder. There's no excuses, they're not going to feel sorry for us. Get out rest tonight and be ready for prime time TV tomorrow."

However, Thomas is confident in the Celtics' depth and believes guys can step up on the road against the Cavaliers.


"We have a lot of good players who can step in at any given time," Thomas said. "That's our strength, our depth, and we have to keep going. Hopefully we can sneak one out of Cleveland."