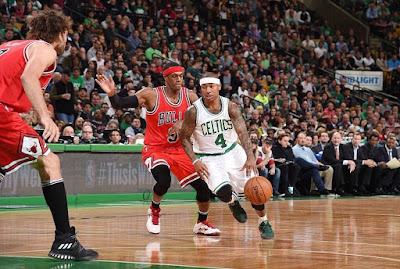 In an offensive slugfest at TD Garden, the Celtics hit the Bulls with a knockout punch towards the end of the final period in a 107-100 win.

The Celtics couldn't keep the Bulls at bay as they managed to pull to within two points (100-98) with 2:02 left in the game. The Celtics' defensive rebounding struggles reared its ugly head against the Bulls as the Chicago took advantage of second-chance opportunities -- fifth chance opportunities in one sequence -- and stayed afloat towards the end of the final period.

A pair of free-throws by Nikola Mirotic tied things up went on a 7-0 run that was highlighted by Marcus Samrt's driving layup with 25.2 seconds left, which made it a two-possession game.

Isaiah Thomas picked the defense apart as he was able to get to the rim with ease and also caught fire from outside (4-of-6). He finished with 23 points on 8-of-18 shots.

Both teams got off to a quick start but it was the Celtics' 15-5 run that got things going, thanks in part to Isaiah Thomas and Jae Crowder -- they combined for 21 points and led the C's to a 36-25 lead at the end of the first quarter.

In his season debut, Marcus Smart reminded us why he's so important as he rattled the Bulls' one-two punch in Wade and Butler on defense and made plays in transition. He looked fatigued at times, but earned himself playing time alongside Avery Bradley, Thomas, Crowder and Tyler Zeller when the Bulls' reentered their starters in the second quarter.

That was until Crowder came down on Rajon Rondo's foot after jumping to throw a pass and sprained his left ankle with less than five minutes to go in the first half. Crowder fell to the floor screaming in the pain before he got up and hopped on one foot towards the locker room.

His night was over -- finishing with 10 points and five rebounds in 14 minutes.

The Bulls kept things close before halftime. They were only down by three points (55-52) before Amir Johnson went on an offensive explosion -- scoring 16 of his 23 points, including 4-of-4 from the behind arc and helped push the Celtics' lead to double digits before the fourth quarter.


"I was just feeling good," Johnson explained. "Made the first one and my confidence built a little higher and I was able to knock down the fourth one I don't think I saw the basket. I just kept my follow through up."

Although the Celtics were out-rebounded by the Bulls their second consecutive matchup (49-39), they balanced their offensive attack by knocking down 14-of-32 3-pointers and shot 47 percent from the floor (41-of-87).


"We got a lot of good players that can step in at any time," Thomas said. "I think that's our strength, our depth and we're just going to keep going. We got a big one tomorrow and hopefully we can sneak one out of Cleveland."

The Celtics improve to 3-1 one week into the season and will face the NBA champion Cleveland Cavaliers on Thursday night.