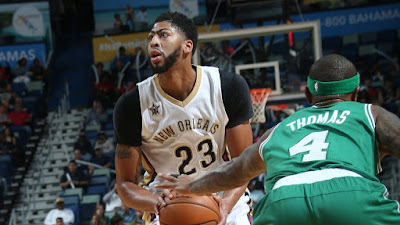 Another road loss for the Celtics and another defeat to one of the NBA's worst teams. Boston became New Orleans' second victim in 11 games.

Anthony Davis' 25 points and 16 rebounds along with clutch plays down the stretch from old friend Tim Frazier, gave the Pelicans and their home crowd a 106-105 victory over the C's on Monday night.

Davis also added four steals and two blocks on the evening as New Orleans won their first home game at the Smootie King Center this season.

Langston Galloway led the Pelicans' bench with 21 points on 8-of-14 shooting (3-5 from behind the arc), while Terrence Jones added 15 points and 10 rebounds. Tim Frazier finished with 10 points and 6 assists for New Orleans, who now have a 2-9 record.

Isaiah Thomas led all scorers with 37 points (25 in the second half) and 7 assists for Boston. Avery Bradley finished with another double-double of 19 points and 10 rebounds. Marcus Smart, in his third consecutive start, chipped in with 15 points and grabbed 6 rebounds for the C's, who are 2-4 on the road and 5-5 overall.

With 14.8 seconds left in the game and the Celtics down 104-103, Tim Frazier stole Marcus Smart's inbound pass and hit one of two free throws to give the Pelicans a 105-103 lead.

Thomas would eventually tied the game with a running layup (105-105) with 7 seconds still on the clock before Frazier drew a foul on Kelly Olynyk (fouled out with 5 points and 8 rebounds) on the other end, leaving 2.5 seconds left and Celtics with no timeouts.

Once again the Pelicans guard Frazier would sink 1-of-2 from the charity stripe, setting up Boston with one final shot to win the game

Boston's first attempt to inbound the ball from it's baseline deflected off New Orleans and with a tenth a second remaining, the Celtics looked to make a long pass from the sideline in hopes of a tip-in.

Brad Stevens voiced his concern on how the Celtics couldn't let Davis' teammates go off the way they did against Boston.

"Anthony is going to be Anthony," said Stevens, whose team limited him to 7-of-22 from the field. "You can't let Langston Galloway go off. Terrance Jones has had great games against us for as long as I can remember. They really hurt us tonight."

Boston trailed by as many as 14 points in the second half before Thomas' 3-pointer midway through the final frame gave the C's their first lead since the end of the first quarter. It would end up going back and forth the rest of the way.

The Celtics, winners of two in a row before Monday, are now 2-4 in their last six games after starting the season off 3-1.

The C's return to the TD Garden to take on the Dallas Mavericks on Wednesday night. Tip-off is at 7:30 PM ET on Comcast SportsNet New England.

Celtics shot 40-percent for the night and attempted a franchise record of 41 3-pointers (making only 12 of them). Al Horford missed his seventh straight game because of concussion symptoms, he was sent home after he was a late scratch from the lineup. No word yet on his return or if he'll be questionable against the Mavericks.