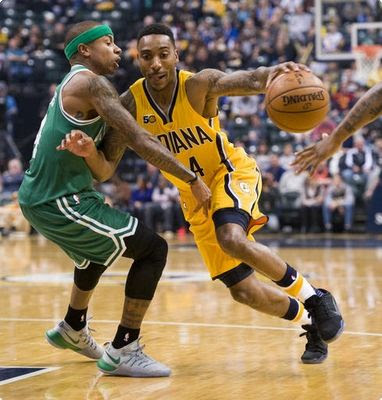 In a game where Celtics All-star Isaiah Thomas didn't find his offensive rhythm until the second half, Boston kept the Pacers at bay in the final minutes of a 105-99 win in Indiana.

Thomas poured in 20 of his 23 points in the second half, including eight of his team's final points at the end of the fourth quarter.

With less than two minutes left, Thomas followed up his pair of free throws with a fast break layup that started with a steal by Avery Bradley stole the ball from Pacers center Myles Turner. The crucial sequence made it a two-possession game (101-94) with under one minute left. The Pacers never came close to tying the game.

Celtics certainly caught a break hours before the game when the Pacers announced that they were going to play without their All-star forward Paul George (left sore ankle). However, the shorthanded Pacers held their own against the Celtics and held a lead throughout the opening quarter.

After taking an eight point lead in the opening minutes of the second quarter (35-27), the Celtics lineup of Rozier, Marcus Smart, Olynyk, Johnson and Young took control of the game by limiting the Pacers to 10 points in last 10 minutes of the half and helped push the Celtics to head into halftime with a 48-45 lead at the half.

Next up for the Celtics will be the Pelicans in New Orleans. The C's will look to make it three in a row before heading back home to for a two-game home stand against the Mavericks and the Warriors.

After rookie Jaylen Brown couldn't find his rhythm in the last minutes of the first quarter, Brad Stevens turned to third-string forward James Young and it sure paid off as Young was able to put together the best game of his NBA career. The third-year prospect scored 12 points, including a pair of 3-pointers, made stops on the defensive end (2 steals) and also finished with three rebounds in 16 minutes.