Brad Stevens on Celtics' defensive struggles: 'We play like a finesse team' 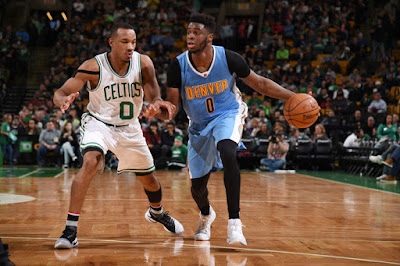 Following their 123-107 loss to the Nuggets on Sunday at TD Garden, Brad Stevens pointed to his team's physicality -- or lack thereof -- as the biggest reason why the Celtics have struggled defensively in their first six games of the season.


"I think we play like finesse team, and they play physical," Stevens explained after the Celtics' loss on Sunday. "So I kind of saw that right out of the gate. You know, they were getting where they wanted to on their drives."

How far are the Celtics from becoming a top three defensive team?


"I don't even know if it's statistically possible based on our week," Stevens answered. "I don't even know if you can make it up in 76 games but we can get a lot better But it starts with holding your ground physically. You know, [Emmanuel] Mudiay goes nuts, that's fine, but Mudiay also gets two putbacks -- or at least one putback early -- that gets you going. Makes you feel good about yourself. We brought a little of aggressiveness at the start of the third quarter but it wasn't sustainable.

So, I don't know. I don't have the answer. Obviously, we've got some guys that aren't playing that will play, but this is about physically holding your ground."

Although allowing points has been the Celtics' biggest flaw, scoring on the other end of the floor has been their biggest strength. Boston is averaging a whopping 110.1 points per game -- one of their better team advantages in the league.

Stevens alluded to his team's success on the offensive end as a reason why he's not surprised by the fact that the Celtics are struggling defensively.


"I thought that this was possible," Stevens explained. "I think anytime that you have a year where you achieve relative success on the end of the floor, there's a slippage -- that's bound to occur because of shortcuts are bound to be taken. What's most disappointing to me is the lack of physicality. But that's on me, like I told you. I've got to play the guy that plays more physical, that's just the way it goes."

Celtics will look to improve to 4-3 on Wednesday night when they head to Washington to take on John Wall, Bradley Beal and the Wizards.