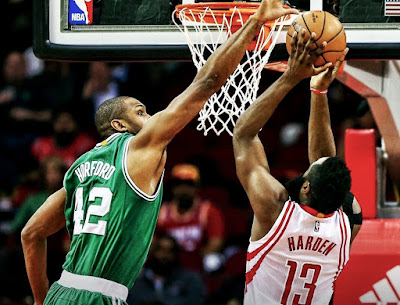 The Celtics missed a golden opportunity to knock off one of the better teams in the Western Conference but instead came up short in the worst possible way.

Houston topped off a 13-2 run with 54 seconds left -- erasing a six-point deficit (100-94) and giving them a five-point lead. Out of a Celtics timeout, Avery Bradley knocked down what appeared to be a 3-pointer but after officials reviewed the play, they ruled it a deep 2-point field goal. In the end, that play turned out to be a crucial call for the Celtics.

James Harden, who led the Rockets throughout their fourth quarter run, committed an offensive foul on the other end of the floor when he elbowed Celtics guard Marcus Smart. Smart knocked down both free-throws -- pulling the game to within one point which set up the Horford driving layup that fell short.


"Coach drew up a great play," Horford explained. "We had a couple of options there. I got the ball and he really crowded me so I put the ball on the floor and I felt good when I shot it but it just didn't go down."

Harden (37 points, 8 assists, 8 rebounds) flirted with a triple-double and Eric Gordon finished with 19 points, including 4-of-9 from deep and Trevor Ariza added 15 points.

Behind Harden's 22-point first half, the Rockets led the Celtics throughout the first half and took a 59-48 lead into halftime. Thomas, who was had his shot blocked before the end of the second quarter, argued for a foul after time expired and was issued a technical foul. Harden drained the extra point to give his team an 11-point lead.

After the break, the Celtics grabbed their first lead since the game's opening minutes and outscored their opponent, 35-19 before heading into the fourth quarter.


"We guarded at a different level, and our first unit played pretty good in the third," Stevens said. "In on stretch in the fourth we turned the ball over and that was hurtful but we played a really good second half. Our second unit did a good job too."

The Celtics will look to bounce back Wednesday night in Orlando when they travel to their third and final stop of their three-game road trip to take on the Magic.

The C's put together a strong offensive attack to counter the Rockets but still came up short in the end. They finished with 27 assists and only committed 11 turnovers.