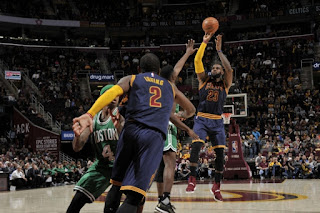 An epic comeback was cut short in the winding minutes of the fourth quarter as the Cavaliers fended off the Celtics in a 128-122 win in Cleveland on Thursday.

The Celtics kicked off the fourth quarter on a 14-4 run, pulling them to within seven -- the smallest deficit the C's faced since the first half. Cavaliers coach Tyronn Lue reinserted his starters with less than seven minutes left and the Cavs momentarily extended their lead before Celtics rookie Jaylen Brown rattled in a 3-pointer snipping the deficit down to six (113-107).

But the Cavs stayed ahead of the Celtics by making stops, converting trips to the free-throw line and finishing on the fast break and kept their perfect 5-0 record intact.

Brown -- who got the nod at small forward in place of Jae Crowder (sprained left ankle) in the starting lineup -- immediately made his presence felt. He scored five quick points in the opening minutes but it was no match for the Cavs' offense. Cleveland ended the first quarter on a 19-6 run and maintained their offensive momentum throughout the half.

With Irving pushing the fast break and knocking down 3-pointers, the Cavs scored close to 70 first half points as they led the Celtics 68-51 at the break and tacked on 100 points before the start of the fourth quarter.

James took matters into his own hands offensively after halftime -- scoring 20 of his 30 points in the third, a season-high for most points scored in a quarter. James was unstoppable, scoring from the perimeter, off-the-dribble and in transition. The closest the Celtics got to cutting their 17-point deficit was when they pulled to within 12 before James pushed the Cavs' lead back up to 17 before the final frame (100-83).

Isaiah Thomas and Avery Bradley both found their offensive rhythm in spurts throughout the second half. However, James' absurd 20-point third quarter made all the difference in game, while Irving and Love knocked down big shots to help end the Celtics' fourth quarter run.

Celtics will take a couple days off before they head home to face the Nuggets at TD Garden on Sunday.

The Cavs' outside touch helped them build a first half lead -- where they drained 11 of their 14 3-pointers. Both teams shot the ball exceptionally well. The Celtics shot 48.4 percent from the floor, while the Cavs made 48.2 percent of their attempts but Cleveland managed to control the pace of the game as the shorthanded Celtics -- playing without Crowder and Al Horford -- struggled to find consistency within their offense.