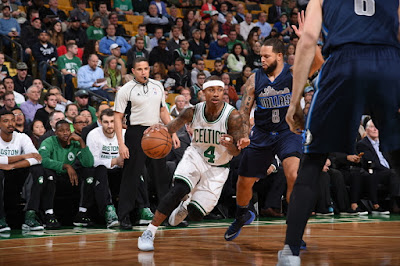 A quick start by the Celtics led to an offensive explosion by Isaiah Thomas and ended in another win at home.

Thomas' 22 points in the fourth quarter pushed the Celtics to a 90-83 win over the Mavericks at TD Garden on Wednesday.

Thomas, who finished with a game-high 30 points to go with his 6 assists and four rebounds, dominated Dallas -- scoring all but 11 fourth quarter points for his team.

The Celtics back court duo of Thomas and  Bradley got things going early -- combining for 20 of the Celtics' 29 first-quarter points. The C's grabbed an early double digit lead (29-17) -- their biggest lead of the night -- and kept the Mavs at bay throughout the half.

At the end of a low-scoring first half -- one where Boston scored only 10 points in the second quarter -- the Celtics took a 39-31 lead into the second half where they saw their lead slowly deteriote throughout the third quarter. In the final minutes of the third, the Mavs pulled to within two points (50-48) and grabbed their first lead of the night (59-58) two minutes into the final frame.

Harrison Barnes finished with a team-high 28 points and Wesley Matthews scored 22 points for the Mavericks.

In the game's final minutes, Thomas matched a 3-pointer by Matthews with a deep shot of his own and followed that play up with a rebound on the other end and gave a through-the-legs pass to Bradley for a loud finish on the fast break. The quick 5-0 run gave the C's an 86-79 lead with 1:06 left to play.

The C's outscored the Mavericks 44-26 in the paint and did an excellent job of pushing their uptempo offense -- which lead to easy buckets. The Celtics finished with 15 fast-break points and held a lead throughout most of the night.

The Celtics (6-5) protected their lead in the final minute and improved to 3-1 at home. They will face one of their toughest opponents of the season when they host the Golden State Warriors on Friday at TD Garden.

Celtics controlled the glass throughout, out-rebounding the Mavs, 53-32, including 13 offensive boards that were converted to 12 second-chance points. However, most of the Celtics boards were pulled down by guys in the backcourt. Led by Bradley's 13 rebounds, guards like Marcus Smart (6), Thomas (4), Terry Rozier (3) and Gerald Green (2) all contributed to cleaning up the glass.