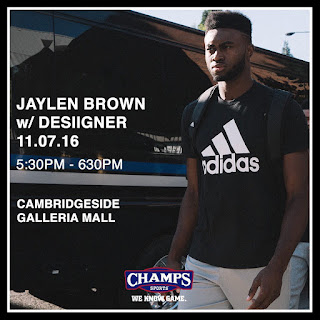 So there's nothing like a few Celtics and rap fanatics gathering at a meet and greet in a mall, right?

Except when a 'few' turns into a crowd of a over a thousand impatient and rowdy fans that police have a hard time trying to control.

The Cambridge Side Galleria mall in Cambridge had to be evacuated on Monday night after police say fans became unruly outside of the Champs Sports store where Celtics rookie forward Jaylen Brown and rapper Desiigner where scheduled to appear for an autograph-signing event.


Sorry I was not able to make it to @champssports. The police had to shut down the mall before I arrived. I'll try to reschedule it soon. pic.twitter.com/E4nQq4mAP7
— Jaylen Brown (@FCHWPO) November 8, 2016


According to Cambridge police, the crowd of over 1,000 people became hostile when they began throwing things such as glass and bricks when they tried to clear the area. Six juveniles were arrested for disorderly conduct, disturbing the peace and trespassing.

State police were called in to assist with the overly large crowd and Boston police's emergency deploy team of 30 troopers also arrived on the scene.

Police said pepper spray was used, and several attendees were treated for exposure.

Young teenagers from ages 13-16 years old started forming lines early Monday afternoon and when the event (scheduled from 5:30 - 6:30 PM) did not begin on time that's when the things got out of hand and people were pushing each other and knocking over barriers.