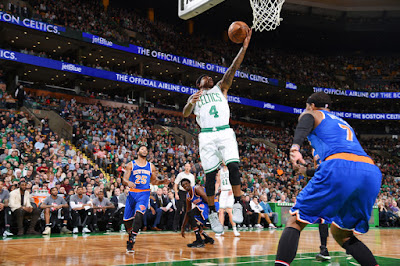 The Celtics were very hungry for a win.

After two consecutive lopsided loses, the Celtics reverted to their old ways and put together their strongest defensive performance of the season in a 115-87 win over the Knicks at TD Garden.

Thomas' stellar first half (23 points) was the biggest reason why the Celtics held a lead at the half. Despite giving up 32 first-half rebounds, the Knicks couldn't slow him down on defense as Thomas found his offensive rhythm and carried it into the second half.

From the tip, the Celtics were aggressive in the opening minutes -- grabbing a 19-8 lead. But New York came back when Carmelo Anthony caught fire and scored 12 first-quarter points to help push his team to within four points (31-27) after the game's first 12 minutes.

However, the Knicks never held a lead throughout the second quarter but their rebounding certainly kept things close. New York dominated the Celtics on the glass -- giving them plenty of chances but the Knicks only scored five second-chance points off of 12 offensive rebounds.

With 4:44 left in the first half, the Celtics caught a break when Knicks forward Carmelo Anthony refuted a loose ball foul called by NBA official Tony Brothers. After he was handed an initial technical foul, Anthony continued to plead his case with Brothers which resulted in a second technical foul from Brother and Anthony was ejected from the game. Anthony finished the night with 12 points and two rebounds in 12 minutes.

Following the ejection, the Celtics topped off an 11-3 run and finished the half with a 10-point lead (61-51). It was the first time the Celtics have allowed fewer than 54 first-half points in their last three games.

After the break, the Celtics picked up their intensity on the defensive end. The C's were chasing down loose balls, fighting through screens and pressuring the ball. They grabbed a 17-point lead (86-69) and took an 86-73 lead into the final frame. From there the Celtics ran away with it, outscoring their opponent 27-24 in the final 12 minutes.

Kristaps Porzingis finished with 14 points and 6 rebounds, Derrick Rose added 11 points and 6 assists and Justin Holiday chipped in 10 points off the bench.

With 12 points in 12 minutes, Anthony was poised to have himself a 20-plus scoring night and would have most likely kept the game competitive throughout the fourth quarter. However, tempers flared in the second quarter with official Tony Brothers, who he has a history with, and poor judgement on Anthony's part resulted in his ejection. The Celtics' defense settled in shortly afterwards and their offense picked up, as well.

Also, the Knicks' frustration didn't end with Anthony's ejection. New York was whistled for six technical fouls (Joakim Noah, Porzingis), including two of them on Brandon Jennings -- who was also ejected.

The Celtics will head to Indiana to take on the Pacers tomorrow night.

The Celtics were very assertive on defense. After halftime, they challenged jump shots, protected the paint and forced turnovers. Their defensive intensity forced 25 Knicks turnovers.