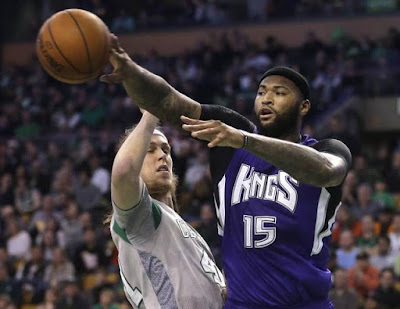 It's only week two of the young NBA season and Kings' star center DeMarcus Cousins is already being mentioned in trade rumors.

According to Amico Hoops' Sam Amico, this season could be the year the Kings part ways with Cousins. Amico reported that one executive says there's a good chance he will be traded and another says the Kings have already explored trading him.


"I'd say it's 50-50," said one Western Conference executive. "If not, it's not necessarily because they want to keep him." [Amico Hoops]

One Eastern Conference GM says the Kings' asking price is too steep for Cousins and that teams should be weary of what Cousins brings from a negative standpoint.


"They'll never get what they want in return," said an East GM. "They think Cousins is worth more than he actually is. He hurts you every bit as much as he helps you. He's like a cheeseburger, or booze. Too much and you'll pay a price." [Amico Hoops]

Whenever a big name like Cousins is mentioned, one has to wonder if this is an opportunity for Danny Ainge and the Celtics to step in and make a deal. Well X-out the ESPN Trade Machine tab you just opened in your web browser because this isn't going to go down anytime soon.

But one can dream, right? Ugh, it's only November but alright let's do it.

If I'm Ainge, and I'm not saying he would do this, but if I was asked to put together the best packaged deal. Here's what I'd offer:


If there's any truth in these reports, the Kings will probably laugh at this offer. But if trading for Cousins means trading key guys like Jae Crowder and Avery Bradley, I think the Celtics are better off keeping their core intact while keeping a close eye on Cousins' situation in Sacramento.

Take it or leave it, Kings.


If you're Danny Ainge, what would you offer the Kings?