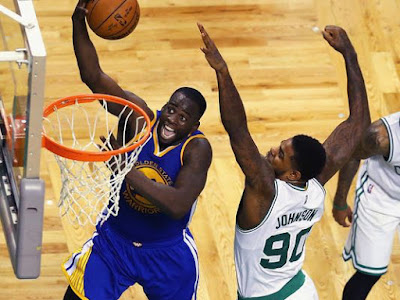 As if the the Celtics losing to the Golden State Warriors  in a blowout wasn't enough, Draymond Green had to open his mouth and voice his opinion on Celtics fans at TD Garden booing his teammate Kevin Durant on Friday night.

After the Warriors beat the Celtics, Green was asked how he felt about the fans possibly booing Durant for not choosing Boston during free agency this past summer

"If you're that mad at what somebody else did with [their] life, you need to evaluate your own life," Green continued.

Realistically, the boos for whatever the reasons, are the right to anyone who bought a ticket into the arena. For Green to get that passionate over a non issue of Boston fans' reactions is down right laughable. Especially since the media just wants to get a rise out of you to begin with, in other words, it's not that serious Draymond 'I'm a mouth breather' Green.


Kevin Durant, on the other hand made it clear before Friday night's matchup that he didn't have any attachment to Boston in any way, so it should have been a dead issue. But once again after the game he was asked about the boos and just like anyone else that's been viewed as public enemy number one (ask Bron Bron) at the Garden, Durant knows it's all in fun and competitive nature when it comes to sports in Beantown


"They come to enjoy the show. There's no hard feelings, " Durant said. "I've still got love for Boston. I still love playing here. You have one of the best crowds in the league. That's what they're suppose to do."


Obviously, the Boston media loves all of this despite Green calling the local fans 'desperate,' but  a lesson should be learned here that the same question shouldn't be asked over and over again, especially if it's already been answered more than once.

But leave it to the Boston media for making themselves look like dumbasses not just locally but to the nation... kudos.