Could This Be The Year Of Marcus Smart? 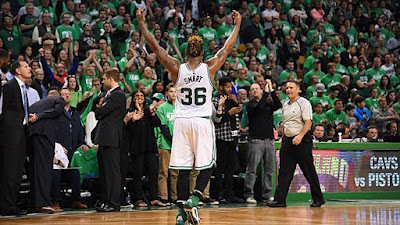 For the Celtics to live up to the lofty projections in 2016, there is no question that Marcus Smart will have to make "The Leap."


It shouldn't shock anyone to read that Marcus Smart's comfort zone is on the defensive end. He is a game changer and has always had a knack for making key plays at key times in a game on defense.

We've seen him be extremely versatile, possibly the most versatile defensive guard in the league. Last year he was guarding anyone from Russel Westbrook and Jimmy Butler to Paul Millsap and Kristaps Porzingis. No one his size in the NBA can claim that and that is an absolute valuable weapon... defensively.

I can sit here and write glowing reviews about half of Marcus Smart's game all day, but for him to really make "The Leap" in year number three he has to develop as a complete player. Smart is such a unique player. It's absolutely unfair to say that in order for him to make the jump to the next level of NBA stardom, that he simply has to score more.  He doesn't have to start averaging 20 points a night, but Smart needs to become more of a complete offensive player, which is something he touched on back at Celtics Media Day.

"My decision-making, coming off ball-screens, working to get into the lane and finishing. And as everybody knows, still working on my jump shot and becoming a more consistent shooter," said Smart when asked about what he focused on in the off season. 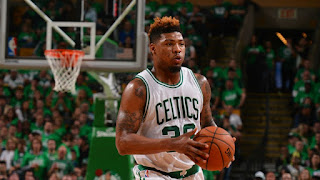 Last year, Smart was legitimately one of the worst shooters in the NBA. He shot a pitiful 34.8% from the floor. (That's not 3-pt%, that's FG%.) He was actually the worst shooter in the NBA with more that 500 FG attempted. He made Ricky Rubio look like a competent shooter at 37 percent and that is saying something. The good thing is that at least Smart recognizes his struggles and seems to have been working tirelessly this off-season on improving in this particular area.

So what type of leap on the offensive end of the court can the Celtics and Brad Stevens possibly expect from a guy that has proven he struggles shooting consistently?

The first thing he can do, is to start limiting his 3-pt attempts. Last year, 46.9 percent of his FG attempts were from behind the arc. He only shot 25.3 percent on 3-point attempts, but decided it was a good idea to make that nearly 50 percent of his offensive game. That's a head scratcher.

There are talented players that have been able to overcome poor outside shooting. Take Jimmy Butler for example, he barely shot 31 percent from downtown last year. However, he was able to make his impact on the offensive end in other ways and only shot from the 3-point line on 19.9 percent of his shot attempts. Smart needs to take a page from that book and make sure he is getting to the basket and stop settling for the three-ball all the time. 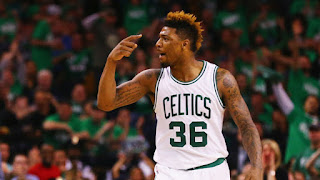 Shot selection is huge for Smart. He has to find that medium where he doesn't lose his fearlessness of taking the big shot, which is one of his better offensive traits, and make sure he is picking his spots. If he is able to stay aggressive and continue to mature with his shot selection, we will see big things from Smart this year.

In addition to improving shot selection, he needs to gain more confidence running the pick and roll. Last year he was a threat when passing out of the pick and roll. If he can keep that up, add on the willingness to take the shot when its there and become a more reliable offensive option, he will thrive. Especially now, he will be playing with one of the best pick-and-roll bigs in the NBA in Al Horford. This should definitely help his shot selection and is partially why I believe he is poised for a breakout year in 2016.

Evan Turner's minutes are ready to be gobbled up by Smart. If he is able to carve out the role of the sixth man on this team, it could be an absolute career jump-starter for the third-year man. More minutes will be on his plate. More responsibility will be thrown at him to be an emotional leader since he's now one of the guys that have been on this team and with Brad Stevens the longest.

If Smart can play with in his means, keep it simple on offense, improve slightly with his shooting, and still give Stevens the versatility he so craves, we could be sitting here in a few months writing that he is one of the most valuable sixth man in the league.

Welcome to the year of Marcus Smart.