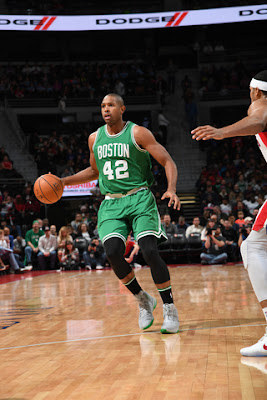 After suffering a lopsided loss by the hands of the Warriors at home, the Celtics bounced back in the motor city with help from their All-star big man Al Horford, who returned to the court after a nine-game absence.

Moments later, Horford made a defensive stop on the opposite end of the floor -- blocking Pistons center Aron Baynes' attempt as time expired. It was his third block of the night and he also finished with five assists, two steals and had a game-high plus-16 rating.

It was his first game since suffering a mild concussion last month. He was in the NBA's concussion protocol program that forced him to miss nine straight games.

Isaiah Thomas finished with 24 points and 8 assists and Avery Bradley added 13 points. Jae Crowder, who's been out with a left ankle sprain, also returned after missing eight games. He finished with nine points and four rebounds in 26 minutes.

After a back-and-forth first half, the Pistons outscored the Celtics, 26-21 in the third quarter and grabbed a seven-point lead (71-64) with 1:09 left. However, the Celtics retaliated in the fourth quarter but never led by more than two or three points.

Andre Drummond's monster double-double (20 points, 17 rebounds) helped edge his team in out-rebounding the Celtics (50-46), while Marcus Morris finished with a team-high 24 points, including 4-of-7 from deep and Tobias Harris chipped in 19.

Harris' 3-pointer with 23 seconds left, tied the game at 92 -- setting up Horford's game-winning shot. Although it was Horford's putback that made him the hero of the night, it was Marcus Smart's effort that kept the ball alive. Smart leaped between Harris and Pistons guard Ish Smith to take control of the rebound before throwing it up towards the rim where Horford was able to grab possession and hit the shot.

Horford was quick to credit Smart for his hustle play after the game in a post-game interview with CSNNE's Abby Chin.

The Celtics will continue their 3-game trip in Minnesota when they take on the Timberwolves Monday night.

With the return of Horford and Crowder, the Celtics are now at full-strength just in time for their 3-game road trip and before they host the Spurs (10-3) at home on Friday. It'll be interesting to see how Celtics coach Brad Stevens will definitively carve out roles for his bench -- one that was projected to be one of the deeper units in the league. The reserves combined for 28 points on Saturday. Smart (7 rebounds, 2 points, 2 blocks), Olynyk (5 points), Terry Rozier (5 points, 5 rebounds) and Jonas Jerebko (9 points, 6 rebounds) were the first ones off the bench against the Pistons. They all played 13-plus minutes, including Smart -- who clocked in 30:36.