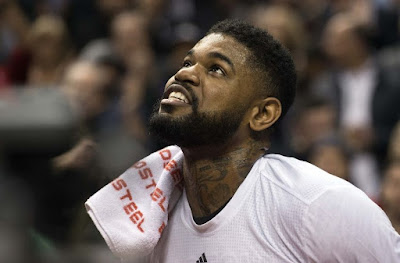 For the second time this season, Celtics big man Al Horford will rejoin his teammates against the Pistons.

The last time the Celtics faced the Detroit, Horford was making his return from the concussion protocol -- which led to him missing nine straight games.

This time, the Celtics will get their big man back after Horford missed Monday's game against the Heat to witness the birth of his second child.

Horford was one of the most important players on the floor when the Celtics faced the Pistons less than two weeks ago. He finished with a double-double (16 points, 10 rebounds) that was topped off with a game-winning rebound-put-back shot with 1.3 seconds left.

However, Stevens knows he's going to need his other big men to step up in cleaning the glass and credited his starting big man Amir Johnson for creating rebounding opportunities for his team that don't always show up in the box score.


"We're asking Amir Johnson to guard a lot of fives, so to judge Amir's performance by his defensive rebound percentage probably isn't fair, because there's probably six rebounds a game that somebody else gets in large part because he's doing his job," Stevens explained.

Johnson, who's averaging 4.2 rebounds per game this season, isn't the only player who he thinks gets overlooked for their hard work in the paint. Stevens also mentioned Jonas Jerebko's defense in the post and how flexible he is in lineups because he has the ability to guard multiple positions.


"[He's] just trying to do what he's good at, I think that's the most important thing. He's a spacer and he's a guy that can guard multiple positions and he's really, really good when he does those things," Stevens said.

Part of the current run for Jerebko can attributed to his strategy with Kelly Olynyk, with the two combining well off the bench in Olynyk's 11 games so far this season. The pair play a similar style, and can pose a threat from both the paint and the perimeter.

"I think people are figuring out how to play and play together and anytime you can do that, that's better. [Jerebko] and Kelly have been a good combination for a while now, and I think that they kind of play and feed off each other."

They combined for 21 points on on 8-of-10 shots, including 3-of-4 from deep. Olynyk, who put together his most impressive stat line of the season finished with 14 points, 6 rebounds, 4 assists and 2 blocks.