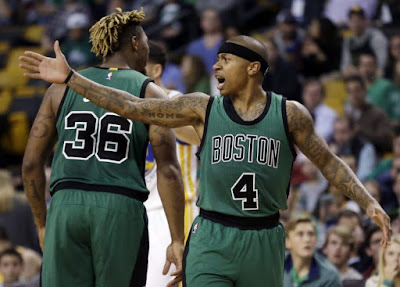 Celtics All-star guard Isaiah Thomas expressed his frustration with his team and his coaching staff on Friday, following their 104-88 loss to the Warriors.

Thomas highlighted the fact that he played less than 30 minutes against Golden State, the fewest minutes he's played in a game this season.

He also talked about the game-changing third quarter -- where Golden State outscored the Celtics 31-9 -- and added that he believes his teammates, along with his coaches essentially accepted their defeat before the start of the dreadful quarter was over.


"Yeah. At that point, the game is turned around," Thomas said. "I guess we gave up. I mean, coaching staff as well. We started subbing, it was bad. Especially, I only played 27 minutes. We gave up."

The Warriors took an 86-58 lead into the fourth quarter, while the Celtics sent out one starter -- Avery Bradley -- along with all bench players -- Terry Rozier, James Young, Jaylen Brown and Tyler Zeller. Thomas didn't check back into game until Brad Stevens whistled for a timeout at the 5:16 mark of the fourth quarter.

By that point, the Celtics were down by 19 points (97-78) but they went on a 5-0 run and eventually got it down to an 11-point deficit with under two minutes left.


"We panicked too fast. Any game is winnable," Thomas explained. "As fast as you can get up, as fast as you can make a comeback. We have a game tomorrow, we have to turn the page. But we gotta be more consistent as players and as coaches."

Thomas also mentioned the fact that the Celtics never trailed the Warriors by a large margin throughout the first half. The third quarter was undoubtedly the difference and although the starting lineup is still missing guys like Al Horford and Jae Crowder, Thomas believes it's no excuse for allowing the Warriors to blow the game open in the third quarter.


"We know we have two of our key players out and that's no excuse but we were in the game for one half," Thomas said. "Everybody seen that third quarter open it up. So if you take away that third quarter and play as close to 48 minutes as possible, we'd still be in the game. You can't let a team like that go on a run like that and expect to come back."

Thomas is the Celtics leading scorer and is ranked top-10 in the league in points per game. He's averaging 26.4 points, 6.3 assists and 2.8 rebounds per game. Friday night marked the first time this season where he scored fewer than 20 points.

Celtics (6-6) will look to stay above .500 on Saturday when they take on the Pistons in Detroit.