Stevens Pregame vs Bulls: '[Rebounding] not going to be a one person thing' 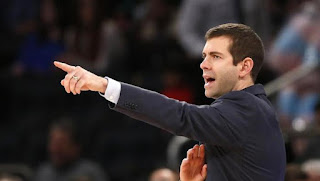 The Celtics will look to avenge last week's loss to the Bulls and improve to 3-1 on the young season without their key player in their front court.

Celtics officials announced on Wednesday that Al Horford will not be in uniform against the Bulls due to the NBA's concussion protocol. Horford took a big hit in practice on Monday and had to leave practice early on Tuesday after experiencing nausea, Celtics coach Brad Stevens reiterated what happened to Horford this week and gave us an update on his condition.


"He felt better today but still had some symptoms," Stevens explained. "So you have to be 24 hours symptom-free before resuming activity and if that restarts -- if any symptoms come up after that 24 hours, once you resume activity, it restarts itself. So, we'll see that happens tomorrow but he will not be on the trip, he will not play in either game."

Avery Bradley, who was considered a gametime decision on Wednesday after experiencing soreness in his right shoulder, will be in action on Wednesday.

Tyler Zeller will start in place of Horford against the Bulls. Stevens also mentioned that there will be no minute restriction for Bradley. Marcus Smart will also play at full capacity off the bench for the Celtics.

Stevens also recognized the importance of rebounding for the Celtics. In their last meeting, the Bulls managed to out-rebound the C's 55-33. Although Horford's absence doesn't help the Celtics on the glass, Stevens understands in order to compete with the Bulls on the glass, it's going to take more than one player in the front court.