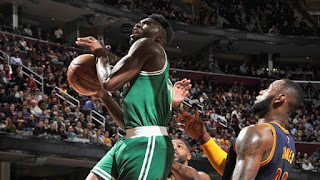 In his first career start, Celtics rookie Jaylen Brown was phenomenal against the champion Cavaliers on a national televised stage -- impressing the likes of NBA Finals MVP LeBron James, who raved about the 3rd overall pick after his 128-122 win over the Celtics.

Brown, who started in place of Jae Crowder (sprained left ankle), went one-on-one against James and not only held his own against arguably the game's best player but made defensive stops and blew past him to score on more than one occasion.


James, who shared a few words with Brown shortly after the game, admitted he was impressed by the youngster.

"I'm not going to tell you what I told him," James said after the game. "If he wants to bring it up that's fine. But I think he's a really good talent, and that's why he was drafted so high. He's a strong kid. You can see he knows how to play the game. Boston definitely is enjoying all the picks that they're getting from the Nets the last few years." [Masslive.com]


Brown greatly appreciated the kind words from James and revealed that he looks up to the three-time champion and considers him a positive role model.


"He just said he'll see me down the road. He said good job, and he said some other things I ain't gonna mention," Brown said with a laugh. "See, I respect LeBron not just on the floor but off. Just want he does off the floor donating to inner city kids, how he handles himself. He's never been in trouble with the law or anything like that. He's just a great role model for somebody like me and I watched him growing up and he's kind of shaped how I am now, just off the floor how he moves, so just how I respect him on the floor I respect him even more off. He's a great role model." [Masslive.com]

The Celtics rookie finished with 19 points on 8-of-16 shots, 5 rebounds, 3 steals and 2 assists, while the veteran exemplified his greatness in near triple-double fashion with 30 points, 12 assists and 7 rebounds.