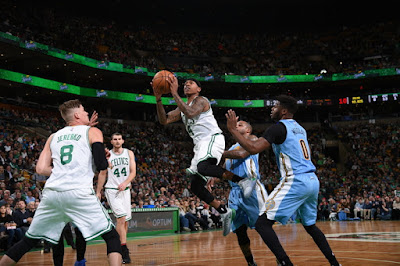 From start to finish the Nuggets put on a scoring clinic against the Celtics and cruised to a 123-107 victory at TD Garden on Sunday.

The Nuggets kept their foot on the gas pedal in the fourth quarter as the Celtics failed to bring the game to within a single-digit deficit. The Nuggets' offense was scoring in every way -- in the paint, at the free-throw line and behind the arc.

For the second straight game, Isaiah Thomas' 30 points led the Celtics, Avery Bradley (14 points, 11 rebounds, 6 assists) finished with a double-double and Marcus Smart added 13 points and 5 rebounds off the bench.

After heading into the fourth quarter down 17 points in their last outing against the Cavaliers, the Celtics attempted to erase another double-digit fourth quarter deficit but came up short as the Nuggets were firing from all cylinders. Mudiay's 24-point first quarter outburst certainly set the tone for the Nuggets. By himself, he outscored the Celtics as they headed into the second quarter with a 42-23 lead.

Behind a well-balanced offensive attack, the Nuggets protected their lead throughout the first half by scoring in the paint, getting to the free-throw line and drilling 3-pointers.

Nuggets shot 64 percent from the floor while the Celtics allowed over 65 first-half points for the second straight game (77-52).

The C's gained some momentum after the break but so did Denver's outside touch. The Nuggets went 4-of-7 from behind the arc in the third quarter and kept their double-digit lead intact en route to scoring over 100 points by the start of the final frame.

Despite shooting 45.6 percent from the floor, the Celtics struggled to make stops on the opposite end and never put together a strong enough run to threaten Denver's advantage.

The Celtics will look to bounce back on Wednesday when they head to Washington D.C. to take on the Wizards.

For a team that's regarded as one of the league's best defensive teams, the Celtics (3-3) have allowed at least 105 or more points in five of their first six games this season.