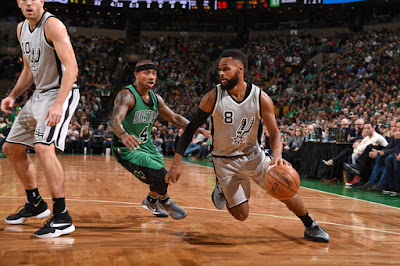 For the first time this season, a Celtics team that was at full-strength faced one of the best teams in the league.

Although the C's have already played against teams like the Cavaliers and the Warriors, both games were played without Al Horford and Jae Crowder.

After sweeping their three-game road trip, Horford, Crowder and the Celtics battled against the third-best team in the NBA -- the San Antonio Spurs (13-3) -- but were outplayed in the second half en route to a 109-103 loss at TD Garden.

Isaiah Thomas' 3-pointer from the corner with one minute left pulled the Celtics to within three points before Spurs guard Patty Mills answered Thomas with a 3 of his own -- making it a two-possession game (107-101). Out of a timeout, Horford's dunk pulled the game to within four points but the Celtics surrendered a crucial offensive rebounds to Spurs forward LaMarcus Aldridge -- who was intentionally fouled and made both free-throws with 18.5 ticks left and that pretty much sealed the game.

The backcourt duo of Isaiah Thomas (24 points, 8 assists) and Avery Bradley (19 points, 8 rebounds) led the Celtics and Jae Crowder had his best shooting night of the season -- finishing with 18 points on 7-of-11 shots.

Leonard finished with a game-high 25 points to go with his 9 rebounds and 4 assists and Mills' 19 points led the Spurs' bench. San Antonio's bench made a big difference in this one. They combined for a whopping 56 points. Former Celtic David Lee finished with a double-double (15 points, 12 rebounds) and Davis Bertans added 15 points as well, including 3-of-5 from deep.


"I think home, road, 20 years or whatever it's been, they finish. It's who they are, it's what they do," Brad Stevens said after the game. "They have excellent players, obviously and an excellent system and style of play and got great play off their bench tonight. I thought their bench was the biggest difference in the game, scoring 56 points total and when you combine that with the rebounding when you're minus-9, which hopefully you can manage that and be a little bit closer even with size difference.We have to play a little bit better to win that game against a really good team."

The C's got off to a quick start, thanks in part to Crowder and Bradley -- they combined for 19 points and along with Thomas' 7 points, raced out in front of San Antonio. Clinging to a double-digit lead, the Celtics took a 10-point lead into the second quarter (32-22). However, the Spurs found their offensive rhythm after the first quarter by going on a 12-0 run, pulling to within one point. Celtics took a two-point lead (48-46) into halftime.

It only took two minutes into the second half for the Spurs to grab their first lead of the game. San Antonio executed pick-and-roll plays that led to backdoor cuts for easy buckets down low. But the Celtics' defense kept them afloat. They made stops throughout the quarter and on the other end of the floor, the Celtics had great ball movement which led to open jump shots and uncontested 3-pointers.

The Spurs' 5-0 run, including a 3-pointer by Mills at the end of the quarter, gave the Spurs a one-point lead (75-74) heading into the final frame. The Celtics gave up a lot of offensive rebounds (12), including five in the fourth quarter, which led to 15 second-chance points for the Spurs. San Antonio's offense took over the game when they needed it most. They scored 34 points on 10-of-18 attempts and finished 22-of-25 from the free-throw line.

Celtics will head back on the road on Monday when they head to Miami to take on the Heat.

The Celtics picked the wrong time to give up offensive rebounds and the most crucial rebound -- Aldridge with 18.5 seconds left -- sealed their fate. The Celtics were gaining momentum offensively in the fourth quarter but the Spurs' offensive rebounding and trips to the free-throw line prevented the C's from gaining a significant advantage.