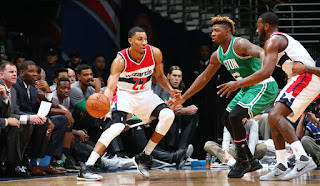 The Celtics made franchise history in Washington on Wednesday and not in a good way as the Wizards handed the C's their worst loss of the season.

The Wizards wasted no time in manhandling the Celtics when they scored 34 points in 12 minutes while holding the C's to eight points -- the second fewest points scored at the end of a first quarter in team history.

The Celtics never led once. Never even came close to tying the game. It was all downhill from the first quarter. No sweeter way to put it as the Wizards beat the Celtics in a 25-point blowout, 118-93.

Wizards forward Otto Porter, Jr., who got off to a hot start by scoring 13 points in the first ten minutes -- finished with a career-high 34 points to go with his 14 rebounds. John Wall added 19 points, 7 assists, while Trey Burke (18 points) and Marcus Thornton (16 points) chipped in off the bench. Five Wizards finished in double figures.

Isaiah Thomas, who shot below 35 percent for the first time this season, finished with a team-high 23 points on 6-of-18 attempts, Avery Bradley scored 21 points and Marcus Smart chipped in 20 points off the bench.

The Celtics continue to struggle on the glass -- Washington were not only a plus-23 in boards (54-31) by the Wizards were able to convert 19 offensive rebounds into 33 second-chance points. It really put a damper on the Celtics' offensive momentum and prevented them from making stops as the Wizards continued to build on their lead.

The C's carried the same lazy team defense from Sunday's loss against the Nuggets over to Washington. The Wizards hustled for loose balls and did a good job of rotating the ball with ease, finding an open shooter early and often.

Washington shot 50 percent from the floor and took care of the ball by limiting themselves to only 11 turnovers.

For the first time of the young season, the Celtics (3-4) are now below .500 and will look to even their record on Friday when they return home to take on the Knicks.

Rebounding has clearly been the biggest flaw of the Celtics but defending the 3-point arc -- along with giving up points in general, of course -- is a consistent pattern throughout their three-game skid. The Wizards made 10-of-21 from deep against the C's. Boston entered the nation's capital as second in the league in most 3-pointers allowed per game (11.2). Ironically, the Wizards (11.3) are in first.