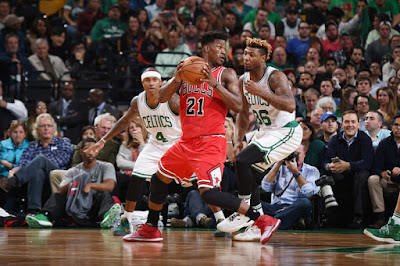 In his season debut, Marcus Smart reminded everyone why he's so important to the Celtics.

While his offense touch might have been off, his defensive prowess shined against the Bulls and thier brightest stars.

Smart rattled the Bulls' one-two punch in Dwyane Wade and Jimmy Butler. He forced them to take awkward shots from the perimeter, pressured them in the back court and was physical with both All-stars when they penetrated the paint.

In other words, Smart being Smart.

Butler, who finished with 23 points on 8-of-21 shots, had trouble finding his rhythm offensively and the same could be said for Wade. He finished with 15 points on the night, on 5-of-13 shots. Both Bulls go-to scorers shot below 40 percent and Smart, who didn't play in the Celtics'  only loss this season, was key in slowing them down.

His defensive play earned him 33:42 of playing time and was a big reason why he was still in the game at the end of the fourth quarter. Smart finished with 7 points, including a game-changing hook shot out of a timeout called by Brad Stevens with 25.2 seconds left that made it a two-possession game (105-100).


"It kind of just happened," Smart said. "I was supposed to get a ball right to Isaiah (Thomas), but he was getting double-played so I just made a play."

How often do you practice hook shots?


"I actually work on those, work on getting it high off the glass," Smart said. "I just figured if I could get to the spot and put it up there it'd be a good shot to go in."

Although Smart did make a big shot towards the end of the fourth quarter, his offense is still rusty with plenty of room for improvement. He shot 25 percent from the floor on 2-of-8 attempts, including a woeful 1-of-6 from deep and was responsible for half (6) of the Celtics' 12 turnovers. Smart's cold shooting continues to be his biggest flaw, however, fatigue certainly was a factor on Wednesday night and Smart was the first one to admit it.


"To be honest, my lungs are on fire," Smart admitted. "But it felt good being the first game back and being able to come out with a victory is always a good thing."

With Jae Crowder (left ankle sprain) and Al Horford (concussion) both ruled out for Thursday night's matchup against the champion Cavaliers, the Celtics will lean on Smart to pick up some of the scoring load. The shorthanded Celtics (3-1) will certainly need Smart to perform well on both ends of the floor if they plan on handing the Cavaliers (4-0) their first loss of the season.