Kevin Durant reacts to criticism for not signing with Celtics: 'I have no attachment to Boston at all' 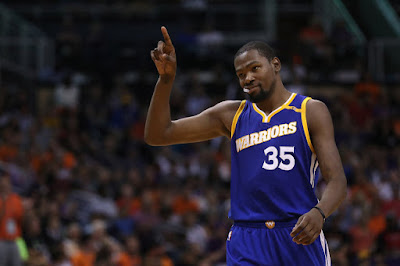 For the first time this season, Kevin Durant will face the team that tried to lure him to Boston during the offseason but came up short.

The Celtics courted Durant over the summer, enlisting one of their city's icons in Patriots quarterback Tom Brady at the Hamptons before Durant ultimately decided to sign with the Warriors two days later.


"What can they be mad about?" Durant asked Wednesday night. "I never played there. I never said I was going there. But they're going to support their team. It's one of the best fan bases in the league -- top-five, easily. So, not matter who goes in there, they're going to boo them. But I have no attachment to Boston at all." [ESPN]

Celtics forward Jae Crowder expressed his frustration with Durant's decision weeks later. Crowder admitted the Celtics openly told Durant their gameplan on how to beat the Cavaliers and the Warriors -- two teams the Celtics defeated last season and would probably meet in the playoffs if the Celtics were to sign with Boston.

Durant was asked if Crowder's comments bothered him.


"Nah, it didn't bother me," he said. "All these guys that you ask the same questions, you know what you're going to get from them. So you're [asking] the same questions. Why am I going to be mad about a guy who has an opinion? I respect all these players. If they don't respect what I did, I can't control that." [ESPN]

Isaiah Thomas, who Crowder mentioned as someone he expressed his frustration with after Durant made his decision, was asked if he still holds a grudge towards Durant for signing with the Warriors.


"No, I've been past that. Maybe for Jae," Thomas said with a smile. "Jae still might be mad but I'm past it."

Crowder, who has missed the past seven games due to a left ankle sprain, will most likely not play in Friday's game against the Warriors. Al Horford, who is still under the NBA's concussion protocol, is considered a game time decision.

Unfortunately, Crowder will have to wait until March to play against Durant and the Warriors when the Celtics will head to Golden State for a rematch. Durant holds no hard feelings towards Crowder and looks forward to the next time the two get a chance to compete against one in other.


"I got nothing but love and respect for Jae Crowder and how he approaches the game and how he plays, but we disagree on me coming here," Durant said. "That's just how it is. It's all good. We're going to compete no matter what. That's one thing -- you can say a lot of stuff in the media or wherever you are, but we're going to compete when we're in between the lines. That doesn't change anything."