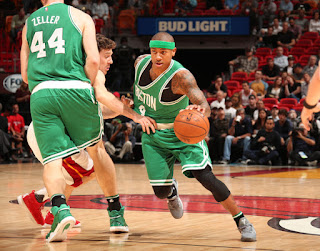 Behind steady defense and a strong offensive surge, the Celtics beat the Heat 112-104 in Miami on Monday night.

Despite being outscored 42-35 in the third quarter, the Celtics built a strong second-half lead and kept the Heat at bay throughout the second half by jumping ahead early and consistently attacking their opponent offensively.

Tyler Zeller (10 points, 7 rebounds), who got the start in the lineup for Al Horford -- who didn't play due to the birth of his second child -- also scored in double-digits.

Playing without Dion Waiters, Justise Winslow and Tyler Johnson, the Heat were also shorthanded on Monday.

Goran Dragic (27 points, 17 assists) and Hassan Whiteside (25 points, 17 rebounds) each led their team with humongous double-doubles and Josh Richardson chipped in 12 points off the bench.

The Celtics started off by shooting 48.8 percent from the floor and held the Heat to 31 first-half points. The C's locked down the perimeter -- where Miami shot 0-for-12 from deep and were up by 17 points before the second half (48-31).

Boston put together a well-balanced offense by attacking the rim while knocking down 3-pointers in a game where eight of the nine players in Brad Stevens' rotation all scored a field goal.

After a slow first half, Thomas found his groove in the third quarter -- where he scored 12 of his 25 points.

Miami's Josh Richardson also found his offense for the Heat. He poured in 10 points after halftime, including 3-of-4 from deep and gave his team a chance to cut their deficit into single digits. With 2.3 seconds left, Heat guard Wayne Ellington drained a buzzer-beating jumpshot to pull his team within 10 points (83-73) before the final frame.

The Celtics' offense picked up the pace as they continued their fluid ball movement but at a quicker rate and leaped out to a 15-point lead (96-81) halfway through the fourth quarter. This time it was Marcus Smart leading the charge -- he scored 9 of his 11 points before the starters came in to close out the game.

Boston shot 48.2 percent from the floor -- nearly the same clip of the first half -- on 40-of-83 shots. They finished with 26 assists and limited themselves to only committing nine turnovers.

Next up for the C's will be the Pistons on Wednesday at TD Garden.

The Celtics bench combined for 35 points. Olynyk finished with a plus-11 game rating in his best game of the season. He did a little bit of everything for the C's -- finishing with 14 points, 6 rebounds, 4 assists and two blocks. Smart's play in the fourth quarter helped the C's keep their lead as he made heads up plays on the defensive end and was aggressive offensively.