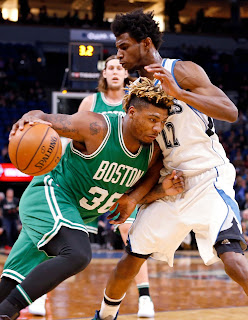 Celtics guard Marcus Smart is quickly becoming one of the team's most vocal leaders, most notably sparking a 17-0 run against the Timberwolves by simply digging into his teammates and challenging them to do more in the paint.

Facing a 13-point deficit at the end of the third quarter, the third-year guard motivated his teammates by giving them an intense pump up speech before they retook the floor for the fourth.

The Celtics responded by scoring 17 unanswered points and regained the lead that they squandered away in the first half.


"I was telling my guys, 'We're being punked out there,'" Smart told CSN's Abby Chin after Monday's game against the Minnesota Timberwolves. "They're getting whatever they way in the paint. Nobody's boxing out, they're pushing us under the rim.'

Al Horford -- whose layup at the end of the third quarter in Minnesota kicked off the Celtics' 19-0 run -- credited Smart's speech for sparking the incredible scoring run after the Celtics' 99-93 win over the Timberwolves.


"Really it all started at the end of the third, Marcus Smart calling out all of us," Horford told reporters after the win. [CSNNE.com]

This marks the second consecutive game where Horford has given props to Smart. Horford received plenty of praise for Saturday night's go-ahead layup with 1.3 seconds left against the Pistons but he made sure that everyone remembered that it was Smart's effort who kept the possession alive for the Celtics.

Smart continues to be a strong voice for his teammates. Just last week, he called a players-only following the Celtics' back-to-back losses against the Nuggets and Wizards. The following night, the C's responded with an impressive win against the Mavericks.

This time, the back up guard voiced his opinion during the game and the Celtics responded on the court with the biggest comeback by any team this season.


"Everybody locked in and they agreed," Smart said. "We held each other accountable. A 13-point lead for them (Timberwolves), it can go away real fast in a game at this level. So everybody picked up their slack." [CSNNE.com]

Smart's effort on and off the court certainly hasn't gone unnoticed.