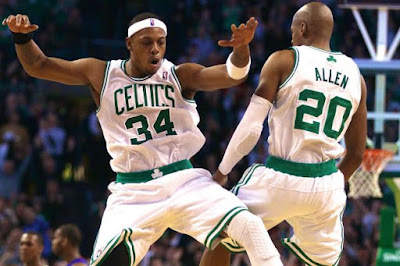 Paul Pierce was in the news again this past week speaking about the Los Angeles Clippers' division rivals; the Golden State Warriors. But this time the 10-time All-Star also spoke about his former Celtic teammate Ray Allen who recently announced his retirement from the NBA after a two-year absence.

Marc Spears of The Undefeated, wrote a piece on Allen and what others around the NBA had to say about the 18-year veteran, who called it quits after a potential comeback. The article goes on to focus on the personality of the 3-point king on and off the court and quotes from former teammates, including Pierce.

Of course the former Celtics captain had nothing but great things to say about the five-year run [2007-2012] of Boston's new 'Big-3' era that Ray Allen was very much a part of. Then there was the 'not so great ending' and departure of 'Ray Ray' that some still seem most intrigued about and Paul Pierce has never been one to shy away from when asked to speak on that matter.

When Allen decided to take his talents to South Beach, just a few weeks after the Celtics were bounced out of the Eastern Conference Finals in seven games to the eventual champions; the Miami Heat in 2012, 'The Truth' had this to say:

“That was a tough situation because we thought it was betrayal,” Pierce said. “That’s why the whole thing evolved like it did with us not talking to him. Ray didn’t really have the best relationship with Rondo anyway. That was nothing. [Rondo], me and Kevin, he didn’t have any talk with us [before his Miami decision].

“I tried to call him and I didn’t get any return calls before he signed with Miami. That was our rival. We were brothers. We came in together. We just wanted a heads-up or a ‘what’s on your mind?’ or something like. Then, all of a sudden, he left. That was the biggest disappointment on my end. Not even getting a callback at that moment.”

Imagine that? Pierce telling it like it is when it comes to good ol' Ray even in retirement.

Though it seemed like so long ago that Celtics and Heat were bitter rivals, it's only been just over four years since that bit of Boston sports history was written.

Some might view that Allen made the right choice as he became a two-time champion in the spring of 2013, but most loyal C's fans still haven't forgotten or forgiven the decision (cue the OKC faithful's sentiments as it pertains to Kevin Durant calling Oakland home these days)

Speaking of Golden State, (Oakland is where the Warriors play for those who still don't know), Paul Pierce made his first (and last) appearance on Bill Simmons' HBO show Any Given Wednesday, and spoke about how he viewed the Warriors in the NBA Finals this past June.

I'll let you view what the Boston icon (no, not Simmons) had to say, in one of those 'you had to be there to enjoy it more' moments. I seriously, can't wait until the first Warriors-Clippers meeting after this one.

Check it out and enjoy Pierce's answer below: