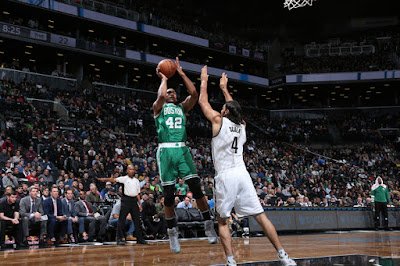 In what was their best overall team performance thus far, the Celtics dominated the Nets on Wednesday en route to a 111-92 blowout in Brooklyn.

Isaiah Thomas (23 points) and Avery Bradley (22 points) led six Celtics in double figures. Al Horford (17 points, 8 assists, 5 rebounds) stuffed the stat sheet, Jae Crowder (15 points, 5 rebounds) had his best shooting night since coming back from his ankle injury, he went 6-of-11 from the floor while Kelly Olynyk and Jonas Jerebko each scored 10 points off the bench.

The Celtics got out to an 11-2 run to kick off the first quarter and kept the Nets at bay throughout the first half. Brooklyn put together a run that pulled them close early on after halftime but the Celtics ended up outscoring their opponent 28-17 before the fourth quarter.

From there, the C's poured it on -- outscoring the Nets 32-16 in the final frame. They were very active on defense and it showed as the C's finished with 13 steals and forced 19 Nets turnovers.

Celtics (9-6) swept their three-game road trip and for the first time at full-strength will face one of the toughest teams in the league on Friday. The Spurs (12-3) are third in the Western Conference and hold the third-best record in the league.

After missing Al Horford and Jae Crowder against teams like the Cavaliers and the Warriors, it will be a great test for the C's to face San Antonio with a healthy roster and riding on the momentum of their three-game road sweep.

Wednesday night's game was easily the Celtics' best offensive outing of the season. The C's not only shot 45.9 percent from the floor but they also finished with 26 assists and only turn the ball over 13 times.