Warriors 104 - Celtics 88: Kevin Durant & Golden State bring the C's back down to earth 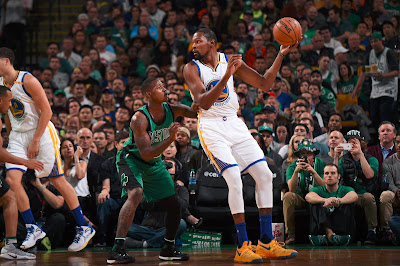 The Warriors reminded the Celtics on Friday why they're one of the best offensive teams in the league en route to a 104-88 blowout win over Boston at the TD Garden.

Klay Thompson scored a game-high 28 points, while Kevin Durant flirted with a triple-double (23 points, 10 rebounds, seven assists) and silenced the boos from the Garden's faithful.

Early on, boos rained down every time Durant touched the ball but that didn't seem to phase him or his teammates; Steph Curry (16 points and 7 assists) and Dryamond Green (11 points, 8 rebounds and 8 assists) contributed and by the second half the Warriors took control of the game and handed the Celtics their sixth loss of the season.

Isaiah Thomas scored a game-high 18 points and Avery Bradley finished with another double-double (17 points, 10 rebounds), while Jaylen Brown and Terry Rozier (7 rebounds and 5 assists) each chipped in 11 points for the Celtics.

Marcus Smart would leave early in the fourth quarter after suffering a left ankle contusion when he stepped on Kevin Durant's foot. He sat out the rest of the night.

Golden State would go on to outscore the home team 31-9 in the third quarter as Boston shot 2-for-17 from the field and turn the ball over five times in that span.

Despite the Warriors leading 86-57 to begin the final frame, the Celtics, with the help from their bench, chipped away their 29-point deficit down to 11 points with 1:30 left in the game. Brown missed a 3-pointer, that would have cut Golden State's lead down to a single digit deficit. Steph Curry, who shot 7-of-20 from the floor, including 2-of-10 from deep, hit a finger role that sealed the game for good.

"I guess we gave up, coaching staff as well, "Isaiah Thomas said after the game. "We started subbing. It was bad. Especially... I only played 27 minutes. We gave up."

Boston trailed 55-48 to the Warriors at the half after a back and forth first half. But it was the Celtics' two turnovers in the first minute of the third quarter that lead to a Kevin Durant alley oop and a Curry pull-up 3-pointer than set the tone for the Warriors to begin the second half.

"They're really good, and we all know that. But you just can't have droughts against them," Celtics coach Brad Stevens said. "They can make it a landslide quickly. Going six straight possessions without scoring, that just crushes you."

The Celtics, who met with Kevin Durant over the summer during the start of free agency, didn't take it personal and probably fed off the TD Garden boos throughout the night.

"They come to enjoy the show. There's no hard feelings, " Durant said. "I've still got love for Boston. I still love playing here. You have one of the best crowds in the league. That's what they're suppose to do."

Boston is now 6-6 and will travel to Detroit to take on the Pistons (6-7) on Saturday night. Tip-off is at 7 PM ET on Comcast SportsNet New England.

Al Horford (concussion) missed his ninth straight game, while Jae Crowder (ankle) missed his eighth. Both are expected to travel with the Celtics on their road trip. But there is still no word on their official returns. Marcus Smart, who will be further evaluated, remains questionable for Saturday's matchup with the Pistons, he's listed as day-to-day.