Celtics will Exercise Options for Marcus Smart, Terry Rozier through 2017-18 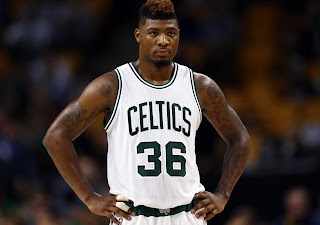 After Marcus Smart revealed he will make his regular season debut Wednesday night against the Bulls, team officials announced that they will be picking up his contract option that will keep him in Boston through the 2017-18 season.

The Celtics will also be exercising Terry Rozier's third-year option. Smart is set to earn $4.5 million next season -- a bargain for someone who's expected to be the team's sixth man off the bench.


While Rozier -- who's predicted to be the Celtics' backup point guard to Isaiah Thomas in the near future -- is slated to make $1.9 million next season.

After playing in only 39 games last season, Rozier has taken on an increased role this year. In three games, he averaged 6 points, 3.3 rebounds, 3 assists and 1.3 steals in 24 minutes while shooting 43 percent from the floor. With Smart returning, his minutes will dip but he's still destined a rotation guy throughout the regular season.

Smart averaged 9.1 points, 4.2 rebounds, 3 assists and 1.5 steals in 61 games last season for the Celtics. Smart is considered to be the Celtics' best back court defender behind Avery Bradley.