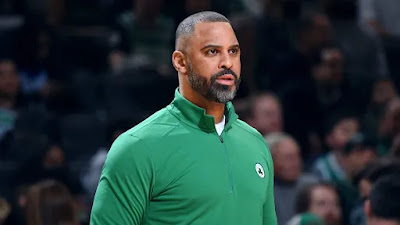 The Celtics have suspended Ime Udoka for the entire 2022-23 season, the team officially announced Thursday night.
While the suspension is effective immediately, the decision on Udoka's future with the franchise will be made at a later date, according to the team's press release.


Udoka violating team policies was cited as the reason behind the suspension, as previously reported by ESPN's Adrian Wojnarowski first on Wednesday night about possible disciplinary action, followed by The Athletic's Shams Charania reporting that Udoka allegedly had an intimate relationship with a female member of the franchise's staff -- which is against Celtics' guidelines.

"I want to apologize to our players, fans, the entire Celtics organization, and my family for letting them down," Udoka said in a statement via ESPN's Malika Andrews. "I am sorry for putting the team in this difficult situation, and I accept the team's decision. Out of respect for everyone involved, I will have no further comment."

The Celtics have also made assistant Joe Mazzulla the interim head coach during Udoka's unprecedent season-long suspension. The team's top assistant coach, Will Hardy, departed in June to become the head coach of the Utah Jazz.
Udoka replaced Brad Stevens -- who is now the Celtics president of basketball operations -- last summer as head coach, following Danny Ainge (Stevens' predecessor) stepping down from the front office.
In one of the biggest midseason turnaround, the Celtics went 28-7 in their final 35 games to finish the 2021-22 campaign as the second seed in the East after the team started 25-25. Udoka led an impressive run past the Brooklyn Nets, Milwaukee Bucks and Miami Heat in the playoffs and into the NBA Finals (fifth rookie head coach in 25 years to make it to the Finals in their first season), coming up just two wins shy of the franchise's 18th title.
The Celtics are scheduled to hold Media Day Monday before the start of training camp at the Auerbach Center on Tuesday.
Joel Pavón
Follow @Joe1_CSP