Yam Madar on joining the Celtics: 'I'm coming to work...earn my place' 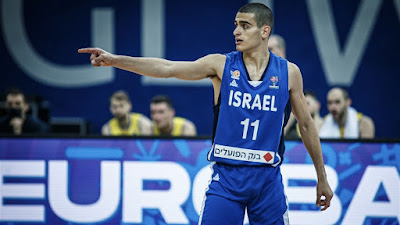 While changes in the Celtics front office have begun, including Brad Stevens as president of basketball operations and Ime Udoka as head coach, the roster has also gone through early offseason moves.
With former All-Star Kemba Walker being dealt for a return of big man veteran Al Horford, the Celtics are in search for guard depth and Yam Madar could be coming to Boston at just the right time.
Madar, who was drafted in the second round with the No. 47 pick by Danny Ainge back in the 2020 NBA draft, is set to join the team for the 2021-22 campaign, while also reportedly planning to play in Las Vegas on the Celtics Summer League roster.
In an interview this past week with Adam Himmelsbach of the Boston Globe, Madar expressed how excited he is to join the Celtics.

Madar averaged 17.1 points, 3.0 rebounds, 5.2 assists, and 1.3 steals on 46.9% shooting from the field and 40.9% from 3-point range with Hapoel Tel Aviv in the Israeli Super League.
With Walker no longer on the roster, Madar could earn a spot in the Celtics backcourt, especially if he continues to knock down shots at a high percentage during Summer League -- meaning his game can transition smoothly into the likes of the NBA -- something he plans on working hard towards.

"The work that I put in, no one else really did. I think that's what separated me from the other guys that I played with," Madar said. "You couldn't tell at that age I would be something different. I'm not 7-foot tall and wasn't super athletic at a young age. The work put me at the place I am today."

An avid Celtics fan growing up, Madar can't wait to get started with his potential new teammates that he has enjoyed watching from afar.

"I'm very excited to be joining stars like Jayson Tatum, Jaylen Brown, and Marcus Smart. I just want to work with them, because I've seen how they mastered their craft and got better. Those are the kind of players I want to work with."
"I'm excited to start in Boston. I'm not planning on going somewhere else. My focus is the NBA."

Summer League will tip-off August 8th and go through the 17th at the MGM Resorts in Las Vegas.
Joel Pavón
Follow @Joe1_CSP